Wynnum Manly Seagulls and Burleigh Bears will battle it out at Dolphin Stadium on Sunday for Intrust Super Cup grand final honours, in front of what is expected to be an extremely boisterous and enthusiastic crowd.

When it comes to the two sides, the Bears won both encounters between the two this year; 26-18 at Pizzey Park in Round 6 and 34-32 during the first week of finals at Kougari Oval.

Excited Seagulls coach Adam Brideson - this his first finals series and Cup grand final - said his team had worked “really hard during the season, starting back in November, so to get to the grand final is obviously a great reward for them”.

“I think they strangled the life out of Sunny Coast on the weekend, so we need to make sure that we can try and control both of those halves and do a job on their middles as well.

“Obviously our structures and our plans are pretty much in place now. We'll work really hard on making sure we do them well on Sunday, but it’s really important that the boys enjoy the whole week and the whole experience.”

Seagulls skipper Mitch Cronin, who has played 114 Cup games, said making the grand final, which will be refereed by Liam Kennedy and Tyson Brough, was “pretty surreal actually – just from where we’ve come from”.

"The last three years we've been down the bottom of the ladder. This year we've turned it around and now we're in the grand final. Everyone's really excited,” Cronin, a gun in his fourth season at the Seagulls, said.

“I think the general theme is that we're not done yet. We're not happy with just making it.. we want to win it. One more to go.

"What we've been doing has obviously been working. In terms of Burleigh, I think we need to start hard and go from there.

“They've got a big forward pack so we've got to match that. Then after that I think we can break them down with our backs and hopefully get some points.

"I just want to do my job. In terms of leadership, I don't think I have to do too much. We've got a lot of boys that sort of share that role, so I'm not really going to change too much. I just want to defend really well and make sure I do my part.”

Bears coach Lenihan, coaching his 218th Cup game – one behind record holders Ben and Shane Walker on 219, said he was trying to keep his team’s lead up “as normal as possible” after they toppled the minor premiers, which had given them a confidence boost.

“Extra build up and attention is a little foreign to our blokes, but as a football staff we're trying to keep it as normal as possible and to enjoy it for what it is,” Lenihan said.

"I think we've really got to be defensively very good. The last time we played them it was a very high scoring game - 34-32 at Wynnum. I don't think we can afford to give them those sorts of opportunities against us. We're certainly working really hard in our defence to try and limit them because they've got a lot of attacking ability with Edene Gebbie, Sam Scarlett, Mitch Cronin and Jayden Berrell - all their little blokes are really quick, fast, steppy blokes who do a lot of work for them. So we've got a lot of work around our defence that we've got to improve on.

"We play a style of game where everyone's got to do their part. We've been going ok the past few weeks. I think it's really important now to relax and enjoy the week for what it is. Once it comes to game day I don't think anyone's more important than anyone else. Everyone's got to do their job and that job flows into someone else's job and that makes their job either easier or harder.

“Everyone on the day has to really participate and make sure they physically buy in.”

Bears skipper Luke Page, who has played 158 Cup games, said he was confident.

“I have confidence in our boys – our two halves Jamal (Fogarty) and (Dylan) Phythian in there, myself in the middle and I will try and do my best to motivate the boys and the backs will do their thing to make it all look pretty - that’s pretty much it,” Page said.

“Obviously the better team on the day is going to win and Burleigh and us boys are going to give it a red-hot crack.

“Definitely it’s a massive forwards game this week – we’ve got Mitch Cronin in the middle who’s a real crafty hooker and you have got the likes of Matt Groat and that playing for them in the middle, so it will be a huge challenge for us definitely.” 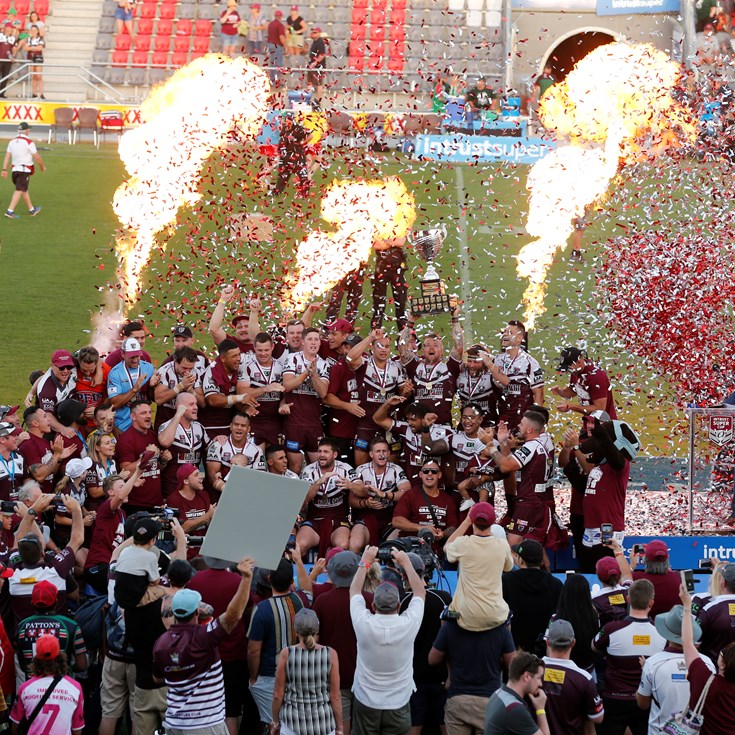 Lenihan: Who needs Winston Churchill when you’ve got Luke Page?