Broncos hooker Lavinia Gould’s days can include working an overnight shift as a crane driver before hot-footing it to training and then home to her two young daughters.

The 2018 Holden Women’s Premiership winner wouldn’t have it any other way.

The 36-year-old will take on St George Illawarra rake Brittany Breayley on Sunday in the NRLW grand final with a spring in her step after adapting brilliantly to her new role.

Gould, who drives cranes for a steel company, is a master at juggling her varied roles.

"I am still working full-time with shiftwork so I have to manage what I do there and how much I make myself available at training. It's been a bit of a juggling act but it is nothing I haven't done before," Gould said.

"I have two girls and they have been very understanding of everything, being somewhat on the backburner waiting for mum to get home and cook dinner.

"They have been very patient. My time is very limited so I have got to be very respectful of that and put my best foot forward in the time I do have in the game.”

Through all of that, Gould doesn’t see herself as special.

"It’s never easy for any parent. I just have an added thing of playing sport as well, but that's every mum who wants to put themselves forward in their life. I am no different to anyone else," she said.

Fronting up against Breayley, her team-mate in last year's premiership-winning side, is a challenge Gould is ready to tackle head-on.

"I just wanted to play my own game and bring my own style, and really be confident in that position.

"I definitely have a long way to go but I am feeling more confident in that jersey and that role. I am in a new position but put me on the field and I will go anywhere."

"Lavinia is just a calm, cool competitor. I love the way she is. She is so humble and so powerful and holds herself so well out there," Brigginshaw said.

"You can put her in any position and she would hold her own. She stood up against Breayley in the first [round] game and didn’t care who she was.

"We all know who Britt is but I think Lavinia stood up and showed she wants to play number nine. She does a fantastic job and defensively she is one of the best defenders I have seen in the game." 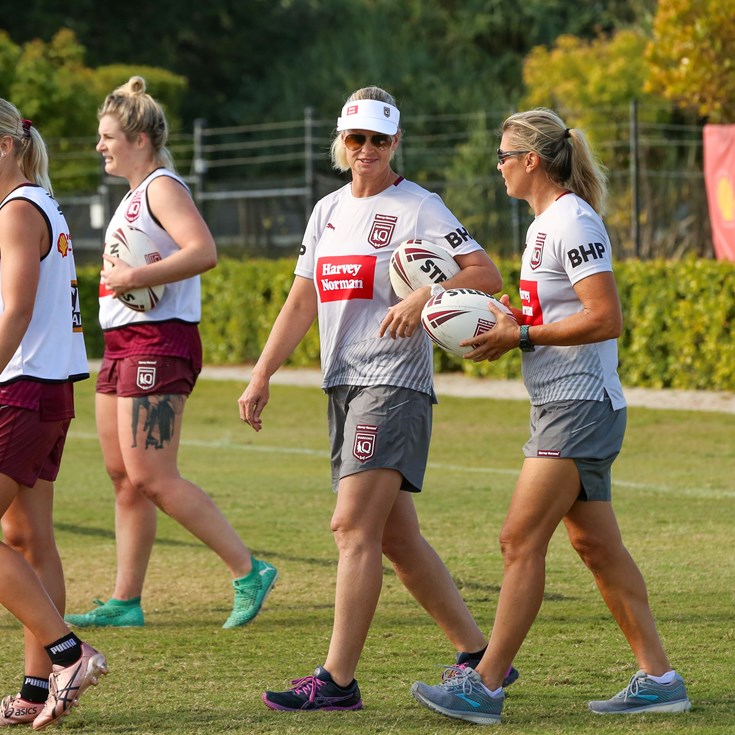 Gould chances her arm on the last

Brigginshaw praises Broncos' focus in saying no to niggle