As their pre-season campaign heats up, the make-up of Brisbane's back line for round one is an array of possible and probables.

Broncos coach Anthony Seibold believes he has the ingredients at his disposal for a back line that can provide the strike that his pack already has in abundance.

Finding the right recipe for success is going to be a challenge due to the versatility of the candidates out wide and lingering question marks over what their best positions are for the team.

The Broncos' inconsistent path to a eighth-placed finish and dismal 58-0 exit in the first week of the finals to the Eels means there are no obvious answers as to what will constitute their "best" back line.

The halves for 2020 remain undecided with a lot depending on whether the Broncos can acquire Melbourne’s Brodie Croft. Brisbane remain privately confident Croft will be with them and that a deal can be struck with the Storm to release him.

The 22-year-old would be the likely round-one halfback with teenager Tom Dearden the understudy.

Of the players signed to the Broncos, Dearden is the man earmarked to be given first crack at the No.7 jersey after his impressive, albeit short, stint in the role in 2019.

Croft and Dearden are solid game managers and their presence will allow Anthony Milford to return from fullback to five-eighth and play his trademark instinctive brand of football.

NRL.com understands that is the most likely scenario for 2020 with regard to Milford. The Darius Boyd experiment in the No.6 jersey appears set to be a short-lived one. Jack Bird has played five-eighth with success for Cronulla and the former Shark will always remain an option for coach Seibold.

The injured Sean O’Sullivan will not be ready to return from a knee reconstruction in the early stages of the season while Maroons under 20s representative Cory Paix is highly regarded. Seibold also used Jake Turpin in the halves in 2019 but hooker is viewed as his best position.

The two centre positions will be hotly contested. Seibold has several combinations he could choose and a plethora of candidates. In 2019 Kotoni Staggs emerged as the first-choice centre for Brisbane on the right side, scoring 11 tries.

Staggs, who showed his versatility by starring for Tonga recently in the halves in the historic Test win over Australia, is regarded as a future NSW representative and is all but certain to retain his position.

Bird and Darius Boyd are prime candidates to play left centre. Bird, one of the club’s highest-paid players, will return from a knee reconstruction while Boyd, who is yet to return to pre-season training, has played in the position with success for Queensland.

In the squad also are Gehamat Shibasaki and former Queensland Reds representative Izaia Perese. Perese, who made his Broncos debut this year, was the Intrust Super Cup centre of the year after a stellar season with Redcliffe.

Jordan Kahu, in rehab after shoulder surgery, has also returned to the Broncos and is another possible centre. Throwing further intrigue and competition into the fray is Jesse Arthars, who has joined the Broncos from the Titans on a two-year deal.

The fullback position will be determined largely by what Seibold elects to do with his halves but Kiwi international Jamayne Isaako has made it known for a long time he wants to make the position where he made his NRL debut in 2017 his own.

Boyd and Milford will always remain options but Isaako's time appears to have arrived. Arthars also has designs on the No.1 jersey.

Maroons winger Corey Oates is the front-runner to retain his left wing position but even he admitted recently that he will have stiff competition from Herbie Farnworth and Xavier Coates.

Farnworth and Coates both debuted this year in Brisbane’s inspirational away win over Cronulla and have impressed coaching staff on and off the field. Both have pace and plenty of improvement in their games and Oates will need to start the 2020 season far better than he finished the one just gone to keep them at bay.

If Isaako does move to fullback then that will open up an opportunity for Farnworth or Coates on the right wing in round one.

Richie Kennar is also signed for 2020 and played two NRL games on the flank last season while Arthars, Perese, Shibasaki, Boyd and Kahu have all played on the wing.

What the above possible permutations highlight is the sheer number of candidates Seibold has at his disposal.

Apart from Staggs at right centre it is hard to be certain at this early stage who is assured of playing where in the Brisbane back line. Club power brokers believe that they have as much depth at their disposal in the backs as at any time in recent years and remain optimistic.

One thing their backs lacked in 2019 was cohesion and continuity. Brisbane’s six premiership-winning sides had that in abundance.

Brisbane’s backs must make marked improvements if the good work of the star-studded forward pack is to be turned into a genuine premiership tilt. 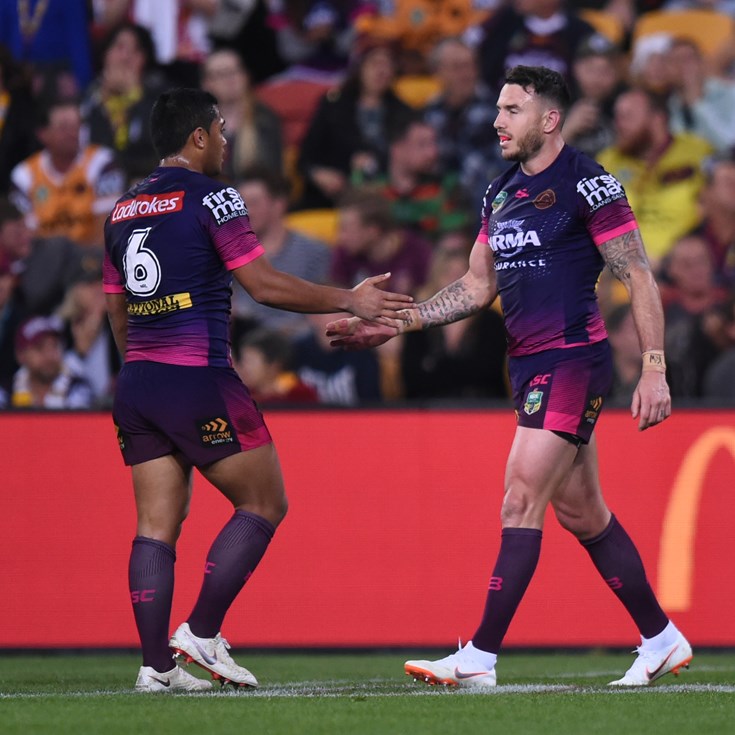