After their worst attacking season in 21 years, the signing of Valentine Holmes couldn't be more timely for the Cowboys.

Missing the guidance of the retired Johnathan Thurston, North Queensland's 378 points scored last season were the third-fewest in the Telstra Premiership and their leanest return since 1998.

In snaring Holmes on a bumper six-year deal, the club now has a bona fide game-breaker who can provide the X-factor it sorely needs at fullback.

The query is how long it will take the 24-year-old Townsville product to hit top gear after a year away from rugby league chasing an NFL dream with the New York Jets.

If the former Queensland and Australian star can recapture his best form, the numbers from his time at Cronulla, where he made his NRL debut in 2014, show how valuable he'll be.

"Without stating the obvious, we're over the moon about signing him," Cowboys coach Paul Green said on Monday.

"A guy like Val with his skillset and athletic ability can really add an extra dimension to our attack, in particular."

Green added: "I think given his age and his experience level, he's got the potential to come back a better player."

The most obvious of Holmes's qualities is his knack for finding the try line.

Holmes's arrival should ease the reliance on Feldt to score.

Having caught fire in the second half of the 2018 season, Holmes recorded the most line breaks in the competition with 26.

He has also proven to be a prolific tackle-buster, making 89 in his most recent NRL campaign and 82 the year prior.

Feldt (12) contributed the side's most line breaks, while lock Jason Taumalolo had the most tackle breaks (71) - with Feldt next on 45.

Not only does Holmes score tries but he can convert them too.

Holmes's biggest rival for the tee in 2020 looks like former Wests Tigers centre Esan Marsters, whose success rate is 71.11%, but lost the kicking duties at his former club mid-season to Paul Momirovski.

Including finals matches, Holmes departed the NRL as the code's premier kick returner with 1494 metres from 26 games last year.

Kahu (547m from 19 games, ranked 37th) was the only North Queensland player in the top 50 of this year's chart, which was topped by Canberra's Charnze Nicoll-Klokstad (1786m).

Holmes is confident he will return to the NRL as good as he was before his US sojourn.

"I was doing pretty good in training and kept in shape as much as I could over there," he said.

"Wherever I fit best in this team, I'll be happy to play." 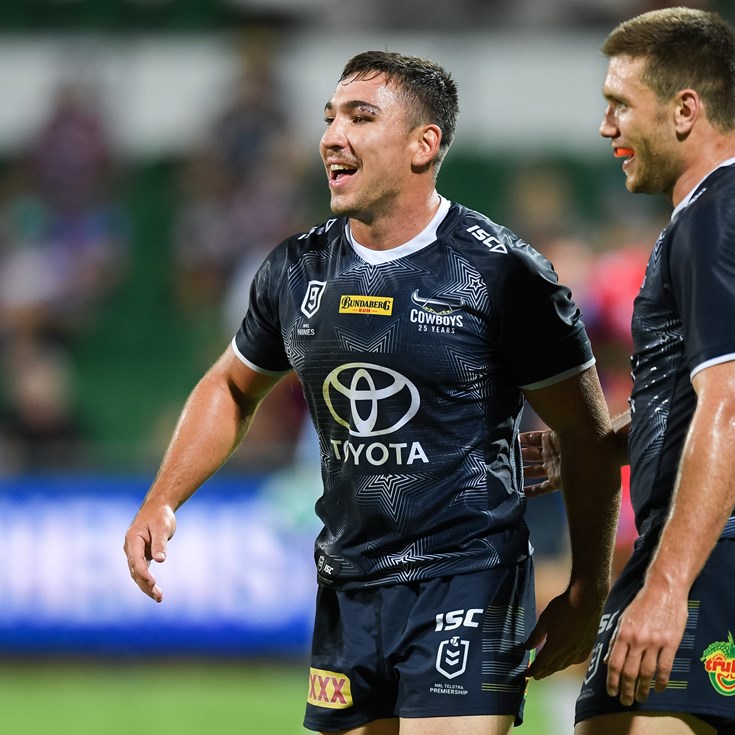