This is one of the most exciting times of the year and I know for us at the Dragons, we can't wait for round one to start.

We've had a strong pre-season after a few team changes since last year and there are also some new rules to get used to and hopefully we will be able to take advantage of them.

It will be interesting to see how the captain's challenge evolves in 2020. We were lucky enough to have an early look at it in the Charity Shield against the Rabbitohs and were able to use it to reverse a couple of calls that went against us.

It's early days but I thought it worked well. I can see how some people might think it will make things clunky or slow the game down because it does take a bit to review it and get the game going again but it seemed to move on pretty quickly from what we saw.

I enjoyed having the option to challenge a call when you could see the officials had missed something so if you see something in the game that's wrong you've got an opportunity to challenge it.

On both of ours I was pretty certain straight away that we should challenge them. The kick Latrell Mitchell dropped, he seemed like he was attacking it pretty hard and I really thought in my head he must have touched it somehow.

The second one they called that I knocked it on first – that was pretty convenient because I knew I didn't touch the ball at all so I challenged it straight away. I was pretty lucky in that case it was me involved.

Our coach Paul McGregor spoke after the game about potentially having some sort of signal to help players decide whether to challenge. I'm not sure yet if that's something we'll end up trying because you do have to make a decision pretty quickly but it's something that might work.

For me the main thing is having that trust in your teammates. If something happens and you're not near it and you see someone in your team blowing up about it you have to ask them straight away what they think happened and if they want to challenge it you just have to trust them and believe they're going to make the right call.

The changes to the scrum restarts will provide some opportunities as well.

I think you'll find most teams will take the scrum in the middle and try and split the defence and take the numbers when they can. That's the way we're going to go with it

The opportunity is to stack one side and hope they don't number up correctly or just sit a couple of guys behind the scrum and just swing them out to whatever side you think is the weaker side or has the least amount of numbers.

I don't think you'll see a lot of 20/40s. Corey Norman tried one in the Shield but it was a shocking kick!

I think the times you'll see it is when teams are behind by a bit, under the pump a bit for a while and trying to get out of their end and looking for cheap metres.

I just don't see it happening too often because it's a gamble. If you're getting smashed on your line and the forwards are doing the hard work then you kick it down and it's not a good kick, they're straight back in the attacking area again and you're defending your line again.

So it's a bit of a risky play at times but I'm sure there will be times teams are willing to take the risk.

There's a bit of a new look to our team as well.

Normy and myself will definitely be starting in the halves, unlike last year there was a bit of uncertainty over who was going to be where but Gareth Widdop is definitely a big loss. He's a great player, Gaz, and someone that's done a great job for St George Illawarra for a while now. We're going to miss him this year but whenever someone leaves it's also an exciting opportunity for someone else.

Zac Lomax is getting his opportunity to play at fullback and we'll need him to step up. It's exciting for Zac, he's another guy that's been training hard and working well.

He's made out over the last couple of years that he wants to play fullback and he's got his shot now so he's going to be looking to impress and play some good footy.

We've got a few injuries as well. Cam will miss a couple of games and a couple of our middle forwards are injured. Korbin Sims is out with his arm and young Josh Kerr's had a great pre-season and he got injured as well so there's a couple of boys out but again that means a chance for other players to step up.

We have to wait until Sunday night to run out against the Tigers.

Some people like that but I'd rather get it knocked over Thursday or Friday and have the rest of the weekend to relax and watch the footy rather than thinking about the game.

But the first game of the year is always exciting and the Tigers are going to be tough. 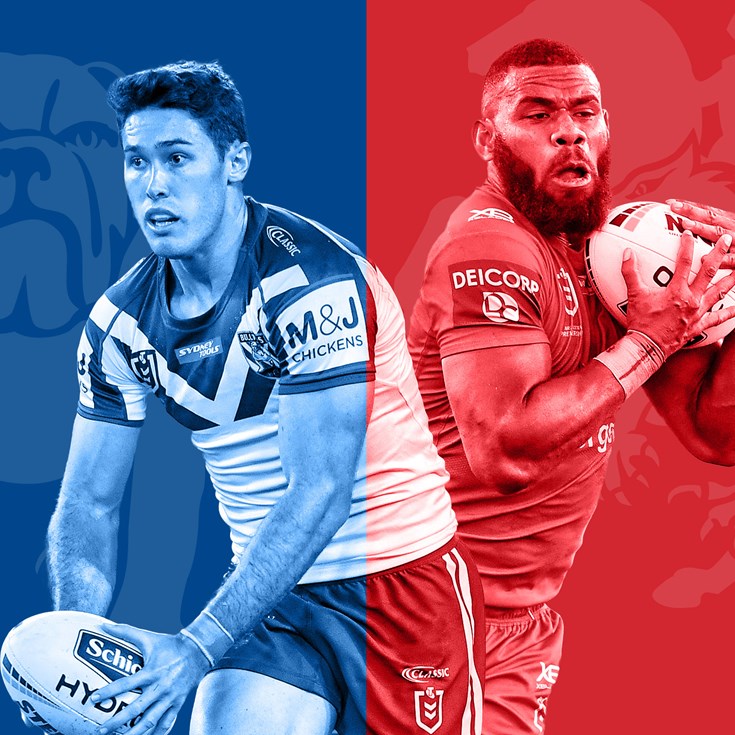 Taunoa-Brown scores as Warriors down Dragons

Who said wingers should never meet?