Northern Pride back Bernard Lewis can’t wait until he can play footy again, when he can link up on the field with his young cousin Hamiso Tabuai-Fidow.

The Papua New Guinea Kumuls representative, one of the north Queensland-raised stars of the game lured “home” by Pride before the 2020 season, was joined at the club by the superstar-in-waiting.

Tabuai-Fidow was one of the North Queensland Cowboys players assigned to play with the Cairns club this year.

Speaking before the decision was made in the interests of health and safety to call off the Intrust Super Cup season, Lewis said it would be great for his family to be able to support both of them playing in the one team.

“It was cool, he didn’t play Round 1, I think because he hurt his hammy, so hopefully when everything dies down and footy goes better we can play together,” Lewis said.

“That will be my first time playing with him.

“(It) will be good for the family to see us both, that would be good.

“I’m back home. I was excited moving back, especially because I haven’t played in front of my family before, none of my family came to watch any of my Roosters games when I was down in Sydney, so it was tough, but now I am here, they can come and watch me, so I am happy about that.”

An explosive back, Lewis was proud of the way his cousin has been able to make his mark on the rugby league landscape, and like the rest of us, thoroughly enjoyed seeing him star at the NRL Nines tournament held in Perth earlier this year.

Lewis himself is no stranger to lighting up that tournament himself, and scored a memorable length-of-the-field try in 2017 to help the Roosters win their semi-final against Melbourne Storm and earn their place in the final.

“I was watching him and I was telling him after every game ‘you are killing it bro! Keep it up!’,” Lewis said.

“I was talking to him throughout it and I was messaging him after games."

On his own eye-catching try, Lewis said all he was thinking was 'try and pin the ears back and run the fastest', but admitted he thought his younger cousin would come out on top if they did take part in foot race.

“Oh, probably him, even in my prime, he is pretty quick! I reckon him to be honest,” Lewis said.

Lewis, like all players across the QRL’s statewide competition, is doing what he can at home to stay fit and active in preparation for season 2021.

It has been quite a journey for the Cairns Kangaroos junior who has had to overcome his fair share of injury setbacks.

“I was upset, I had a good start of the year that year with the Nines (2017) and after that I had my first NRL trial game and went pretty well in that, scored a try,” Lewis said.

“Then the week after, I was supposed to play in the Manly trial and that’s when I did my ACL, right at the start of the season when everything was getting good, and it felt like everything went downhill from there.

“I got my surgery straight away and then moved back and it was hard because in Round 1, Daniel Tupou hurt his pec and he was out for like 10 weeks and I did think that could have been me moving in straight away playing, and it was definitely hard.

“And then, when I did my knee, I never thought that ... from the start that I would be able to walk properly again, it was the longest process.”

However, he worked his way back to fitness and last year, he achieved a lifelong dream when he got called up to represent the PNG Kumuls.

“Definitely, playing for PNG, that was one of the highlights (of my career),” Lewis said.

“The first time I was selected for the PNG team, I was so excited.

“I was so proud to represent my country and my family. I rang my parents straight away and I cried on the phone to them, I was so happy.

“I was so happy because ever since I was young, I wanted to represent PNG, so when I got the call up, I was so happy and I tried to do my best for everyone.

“I knew Rhyse Martin and James Segeyaro and Kyle Laybutt, those were the only boys I knew in the team. But in the first day of camp, I bonded straight away with everyone.

“We were talking about it, all the support, and it’s just different, you can just feel it, it’s different.

“Knowing that you are carrying that many people with you on your back when you are playing, it makes you play a lot harder.” 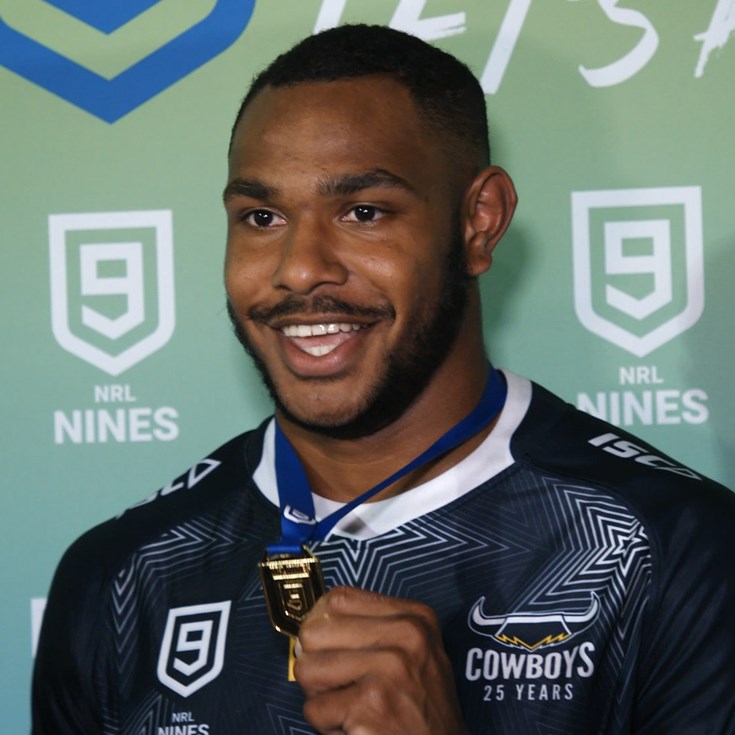 NRL Nines day two: How it all unfolded