Being a Queenslander means everything to me.

For me personally, growing up in central western Queensland, based in the bush, being a Queenslander was a way of life.

Being a good Queenslander meant everything to me growing up.

Obviously the Queensland State of Origin team was the pinnacle for us based out there.

I think rugby league is pretty much the lifeblood of the communities out west. It’s really hard to see that it’s probably struggling a lot at the moment.

But growing up, it was pretty good. Good to be able to play.

I remember playing my first game, I think when I was about 10 years old, you just start to form friendships straight away. Some of them have carried throughout my lifetime.

Every afternoon, or day at school, we’d be playing rugby league of some form.

You’d go up through the grades and it brings everyone together. It brings the community together.

I hate to say this…. Ilfracombe was too small to have a team, so I played for the Longreach Tigers.  Still pains me to say that, to this day. But that’s where I got my start.

Getting my first call up for Queensland, my first feeling was shock.

I still remember the phone call… 2006, I was very new to NRL. I’d only played 12 or 13 NRL games at that stage, so I certainly wasn’t expecting to play State of Origin.

I think, from memory, it was Greg Dowling who rang me. I didn’t even know who Greg was. I never told him that, but it’s out of the bag now.

It was a bit of a whirlwind for me. Very much a shock, but I was so excited.

I still remember breaking out in goosebumps when I got the call.

I still remember the feeling as I put the jersey on for the first time, and running out of the tunnel. It was such a great feeling. A feeling that never got old.

You wish you could go back there and relive it. That’s for sure.

There’s nothing quite like running out for State of Origin, to represent Queensland. Particularly for your debut game.

Running out for the first time at ANZ was pretty crazy. We ran out to a big chorus of boos. I’m pretty sure it was the first time I’d played at ANZ even, so it was such a big deal for me.

Never playing in front of a crowd even remotely like that before was a pretty crazy experience. But still a very proud moment.

You could name every player I’ve played with as my favourite. It was such a good – great – team to be part of.

We had a squad that stayed together for such a long period of time. So, we really got to build some great relationships through playing for Queensland.

I guess when I first came into the team, Petero Civoniceva, who I’d always looked up to, was such a great guy. I don’t think anyone has ever said a bad word about Petero.

So, to be able to play with him, and room with him, for my first camp was something I’ll always remember.

He has been a bit of a mentor of mine over the years. Not in terms of ringing up all the time, but just watching what he has done and how he has carried himself. Seeing the type of person he is, is something I’ve always admired and respected.

Getting to play a few games with Darren Lockyer was just so good. He was almost a mythical figure to me growing up. So, to be able to play with him and get to know him as a person…

Apart from being such a great footballer, you know, he was also a great bloke and fun off the field. To see that side of him was great.

The list of people I enjoyed being around could go on.

Other forwards – Nate Myles, Corey Parker, Sam Thaiday. Getting to play with Jacob Lillyman, who I’d had a lot to do at the Cowboys with. David Shillington, who was my roomie was for a few years.

JT, obviously I played pretty much all of my footy with him. Being able to go into camp with him, he was almost a different person in Origin camp and certainly playing Origin.

It’s very hard to find the words to describe JT. He’s a very passionate, emotional guy. He’s a great friend, very energetic or whatever term you want to use.

He’s great to be around because he does bring that energy into whatever he does. That’s why he has been so successful – both in footy and out of it. He’s got a great personality and really does care a lot for those around him.

I know the way he thought about the Maroons jersey, he gets very emotional about that still. He had an immense amount of pride in playing for Queensland. Whoever he played for. And that’s what made him so good.

If you want to sit for a few more hours, I could keep going.

Being part of the Queensland story, and forming part of its history, is almost like it’s not real.

To be privileged to have such a good career in the State of Origin, and to be part of that team, and to have done what we did through that era, is still very surreal. Very surreal.

To be spoken of in the same sentence as some of the legends of the game is surreal.

It was such a great time in my life.

That period when I got back into the side in 2009 through to 2016 or whatever it was, it was one of the best periods of my life.

Picking a moment that stands out for me, when wearing maroon, is difficult because the games and the series all meld together. It’s really hard to distinguish a moment.

I don’t think I had a particular rival. Just the colour.

I did really like to make it personal with any pack I went up against, particularly playing for Queensland.

You know, Gal was probably the only guy – him and Greg Bird, Luke Lewis maybe – that stayed for any length of time.

But as far as front rowers, they went through a few. Probably because of how we played.

But I remember my mindset going into Origin games, I’d always look at the pack they chose and really go through it.

I remember certain years the pack would really be talked up about being bigger and better – finally the pack that’s going to get over the top of the Queensland players.

And I’d take that personally and I would make a point of trying to get over the top of the opposition. No one in particular, but the Blues pack in general.

Queensland fans, thank you for helping make my time in maroon so enjoyable. There’s no one quite like you.

You’ve been so good to me since I first pulled on the jersey.

One good part about the Queensland team, and the whole system, was the amount of time we actually spent with our fans.

When Mal brought in the trips to regional Queensland, which we’d do every camp, were some of the best trips I’ve been involved in.

Growing up in Ilfracombe and the exposure we had to professional rugby league and State of Origin, and knowing how non-existent that was, to be able to go into communities that have never seen teams like that before, and see the joy on their faces – on your faces - and to get to meet people and speak to people, help out in areas affected by drought, and everything else, floods, was unbelievable.

It was one the best parts about representing Queensland. It really was.

It was almost life-changing for some of those kids that would probably never get to meet their heroes before, to see them up close and personal. To be able to be part of that was pretty special.

We definitely benefited from those trips as a squad. Particularly to show us the sort of affect we had on the people of Queensland. On you.

It really made us respect what we were doing and respect the jersey and who we were representing a little bit more I think.

For me, after this last year, the support I’ve received has been incredible.

It was very humbling to see the amount of support I got throughout Queensland, the NRL and rugby league community in general. And how widespread that support was, it was quite humbling.

I get a little bit emotional at times, after going through what I went through. It certainly made me realise how many good people there are out there.

Like I said, it was very humbling to experience that. It was great for my health and recovery.

I’m pretty good now. Much better than I was, that’s for sure.

I’ve got a few ambassador roles for the Cowboys and QRL which I’m pretty excited to get stuck into. To be able to still represent the two clubs, as such, is a privilege.

I’m very fortunate that I’ve been able to put myself into a good position with people I’ve met and things that I’ve done. That I can take time over the next few years to pursue things I’ve wanted to pursue.

In terms of the Maroons, I think the future is bright.

Obviously they’ve got a bit of work to do after the last couple of years, but I think there’s so much potential there. You see the young guys coming through. I wish I had the chance to be part of this team as it develops.

I think it’s not long before they really do show what they can do at an Origin level.

We went through it, back before 2006, we had a couple of series losses and we came out the other side and really dominated, so there’s no reason why these guys can’t do the same.

Queenslanders, thank you – for one. Thank you for all of your support and making my career so enjoyable.

But also, just continue to do what you have done over the last so many years. It’s the reason we do what we do. For you.

Origin and the Origin team wouldn’t be the same without you. 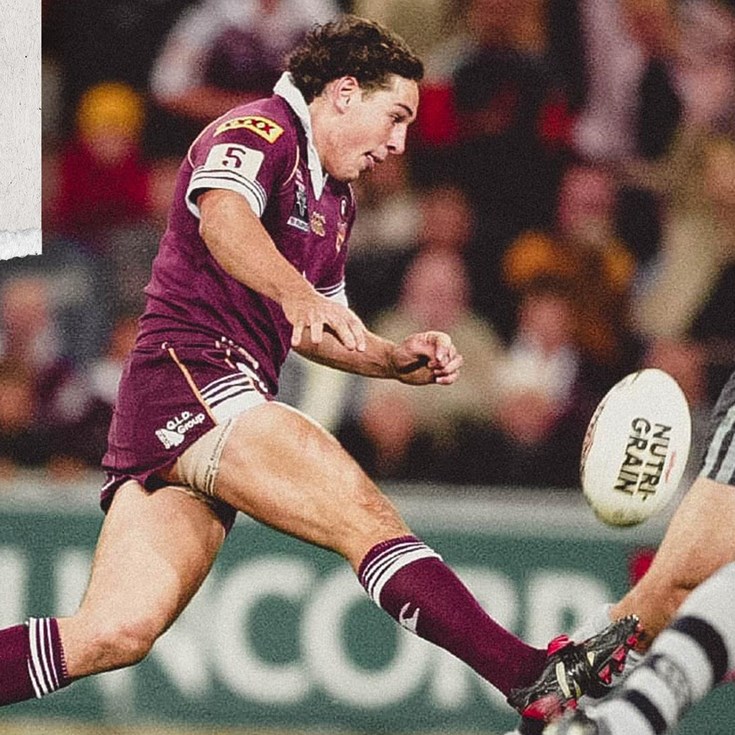 6 - Slater's try lights up the cauldron

Sponsored By XXXX 2 days ago