Some Steel City fortitude almost dragged Adam O'Brien's Newcastle back from the brink, only for Melbourne's own on-field coaching maestro Cameron Smith to prove the difference in a hard-fought 26-12 win at Central Coast Stadium.

A week out from his 37th birthday, Smith's first-half masterclass kept a fast-finishing Knights outfit at bay as they chased down a 18-2 half-time deficit.

For much of the first 40, Smith marshalled Melbourne as though carrying a clipboard each time he went to dummy-half, engineering two tries against a wearying Newcastle defence.

The Knights' 16-point shortfall at the break was deserving given their simple inability to hold the ball across the first half.

Their second-half revival equally appropriate for their efforts without it.

Having grimly defended their line for most of the first half, Kurt Mann literally got things rolling to start the second with a deft grubber in the 53rd minute.

Bradman Best made a three-course meal of a simple grounding, but maintained just enough contact with the Steeden for an 18-6 scoreline.

When Edrick Lee snuck over out wide, Kalyn Ponga's sideline conversion made for a thrilling finish worthy of O'Brien's first showdown with Melbourne and his coaching mentor Craig Bellamy.

Newcastle's wet sail was eventually lowered by a dubious 73rd minute penalty against David Klemmer, who collected Dale Finucane off the ball without moving himself when the Storm star ran a decoy.

Smith's penalty goal put the Storm beyond reach, before his namesake and No.9 successor Brandon Smith pushed the margin out further than the Knights' fightback deserved.

In the end it was the evergreen Smith that inflicted O'Brien's first loss as an NRL coach as much as anyone.

The Storm skipper finished with two try assists, five from five off the tee and a quick stand-in role for referee Ben Cummins when he took issue with a stripping penalty against his side.

For what it's worth too, little doubt remained by half-time as to whether Smith has yet another season in him if he wants to go around again in 2021.

Smith put his starring role down to Melbourne's gradual adjustment to the high-octane play created by the NRL's new six-again rule.

"I think we've adapted a little bit over the last fortnight to the way the new game's played, what everyone is calling the new style of footy," he told Fox Sports after full-time.

"But when your big boys get quick play-the-balls, it gives you a little bit of momentum to put your craft to work. I thought that our forward pack was great tonight."

With Jahrome Hughes nursing a broken hand Smith even trained at halfback during the week, but it was genuine No.7 replacement Ryley Jacks who produced first points after just three minutes.

He was on the end of some slick Storm finishing, and lazy cover defence from Herman Ese'ese, as Jacks snuck past him to ground a Josh Addo-Carr grubber he had no right to.

From there it was all Smith as Melbourne went about dismantling Newcastle's dogged defence.

With sleight of hand he sent Suliasi Vunivalu sliding over down the short side, catching Edrick Lee rushing up and then knocking over the sideline conversion for fun.

Lee try gets the Knights to within six-points

And despite the Knights finishing fast, Smith and the Storm never relinquished a lead that takes them now to an all-too familiar spot at the pointy end of the NRL ladder.

They now face Penrith while Newcastle are on a short turnaround to face Brisbane, with O'Brien lamenting a rare slow start from the Novocastrians.

"We scrapped for everything and fought hard, we fought hard in the second half," O'Brien said.

"But just that start, we just got beaten to the punch by a team that that was running harder, playing the ball quicker and sticking their contact a lot harder than we were.

"It's hard to be too critical of them and what they've done, but we can't rest on that." 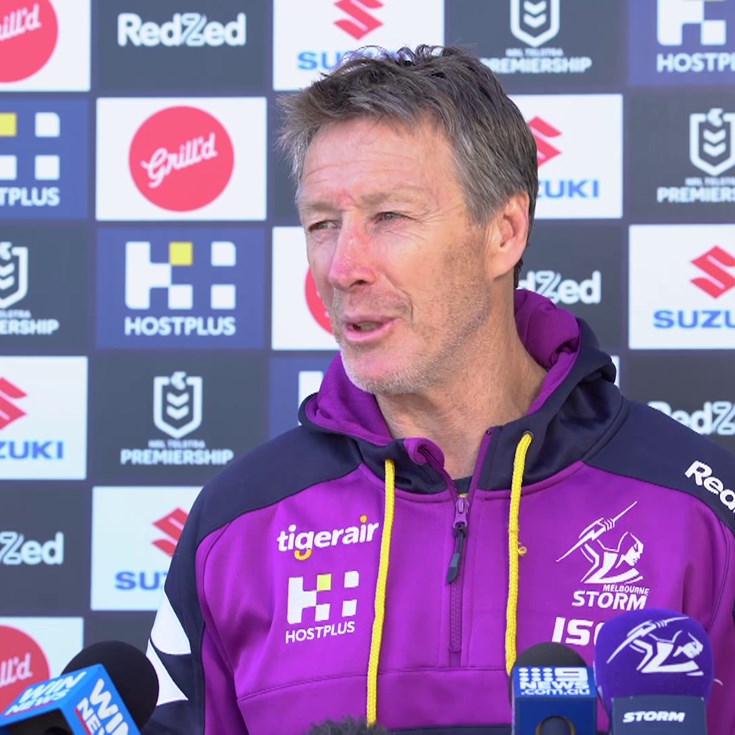 Bellamy thinks Storm may see out season in Queensland