Several NRL rivals have already registered early interest in Melbourne fan favourite Brandon Smith as he hits the open market in search of a starting hooker spot from 2022.

Smith is understood to have wanted a regular No.9 spot for the past few seasons but has been stuck behind Storm icon Cameron Smith and with the emergence of Dally M rookie of the year Harry Grant, he has been granted permission by the club to explore his options elsewhere.

The grand final winner is contracted to Melbourne for the next two years, but his future has been in the crosshairs for some time given Grant's form while on loan to the Tigers and Cameron Smith's own uncertain plans.

Much like the situation with star teammate Josh Addo-Carr this year, Smith has been given Melbourne's permission to explore other options, with his potential release contingent on the Storm getting a quality player in return.

The Storm are not necessarily chasing a "like-for-like" hooker, but a player on the same relative level as the Kiwi international.

Smith's agent Stan Martin made contact with 14 NRL rivals on Monday via email sounding out his availability and he confirmed interest has already been lodged in the popular forward.

Wests Tigers, despite having freed up funds with Josh Reynolds release to Hull FC and potential to make Smith a marquee hooker, are yet to express an interest.

The Gold Coast have also been linked to the 24-year-old for some time as well as Canterbury, with both clubs boasting salary cap space and need for a top-line hooker as they continue their roster rebuilds.

The Warriors could also offer an avenue to return to his native New Zealand for Smith and are yet to lock in a long-term hooker under new coach Nathan Brown.

"It's a similar situation to Josh Addo-Carr, he'll be released for 2022 if another club will offer a player at the same level as Brandon," Martin told NRL.com.

"There is no suggestion of 2021, Brandon will be there next season absolutely.

"And Josh Addo-Carr is still there at the moment, so there's no definitive aspect to him leaving.

"But Brandon has wanted to be a hooker for some time and he’s been behind Cameron Smith for four years."

Asked if Smith has a preferred location to land on a new deal, Martin said: "His preference is to go to a club where he’s the first-choice hooker."

Smith is understood to earn a little more than $400,000 at the moment but is in line for a sizeable upgrade considering his form in recent seasons.

Clarity on Smith's future may take several months to arrive given Addo-Carr's similar contract situation played out throughout all of 2020 only for the NSW Origin flyer to agree to an upgraded Melbourne deal.

The Storm are also yet to fully explore where their roster could be improved in 2022, with Smith's potential swap replacement to be dictated by the player market.

"Brandon is a wonderful player and great person to have around the club," Storm football manager Frank Ponissi said in a statement issued by the club on Monday.

"Given he is now a premiership player, national representative and has been a valuable asset to our team over the last few years, any move will only be considered with appropriate arrangements put in place.

"The club has shown we are comfortable with negotiating these requests while also maintaining our performance on the field, given we were in the same position with Josh Addo-Carr only 12 months ago."

Smith, currently at home in New Zealand, is slated to return to pre-season training at the same time as the rest of their squad on January 4. 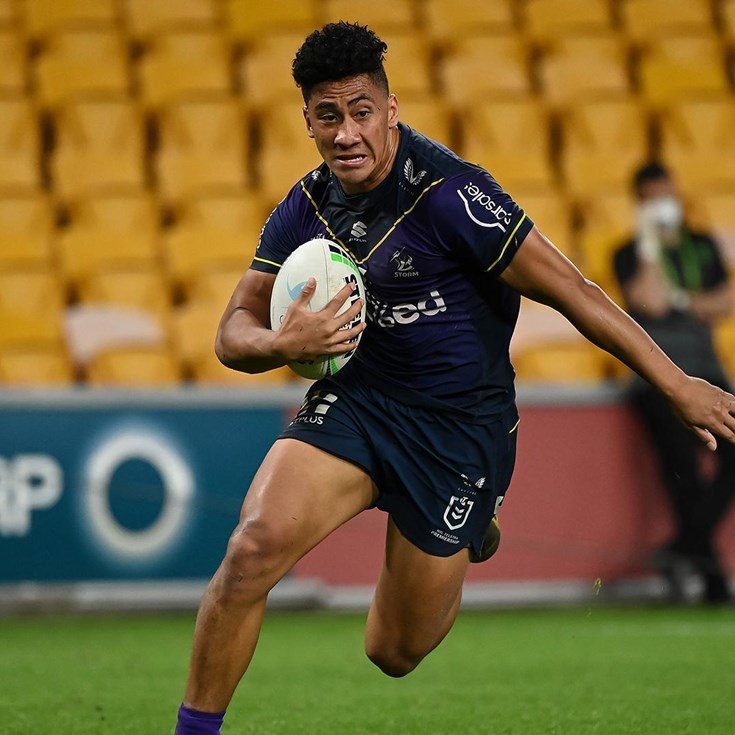 Ieremia shines for star-studded Storm with a hat-trick

Storm break record and prove too good for depleted Panthers