The Burleigh Bears and Souths Logan Magpies took part in an outstanding clash at Browns Plains in Round 4 of the Harvey Norman Under 19 competition on Saturday.

The Bears went hunting in the first six minutes and came up with two tries that got them off to the perfect start.

Lily-Rose Kolc – who claimed player of the round honours for her play – contributed to the Bears win by doing everything.

Kolc excelled as she ran, passes, tackles and scored her way through the afternoon.

While his side came off second best, opposition coach Paul Brown was glowing in the praise of his young enthusiastic Magpies.

“We started slowly and that cost us; they scored twice in the first few minutes and Lily-Rose Kolc was just great for the Bears," Brown said.

“We fought back and showed resilience.

"I thought we were getting on top at halftime, but they pulled away again.

“We had some great competitors, our hooker and captain Oshanis Whakatau and our second row Dilyza Leugaimafa.

“We had our youngest ever debut too with Imogen Nocon who is only 16, but came to us in pre-season and has just worked so hard she had to play.”

Tahnee Norris, who is in charge of the BHP Premiership team at the Burleigh Bears and is currently looking after the girls team, said where the game is won and lost is up front.

“Our front row was really good, that’s where we won it,” Norris said.

“Lily-Rose Kolc is smart out of dummy half, but then our two front rowers make such strong carries.

“Dannii Perese and Ebony Laing do a great job.

“We have a few things to work on before we come up against Ipswich and Panthers (in Round 5).

“We just dropped too much ball, not even under pressure, just dropped and we normally pride ourselves on not making those errors.”

Elsewhere in Round 4 were more great games.

The Cutters sharpened their cutting skills on the Blackhawks and impressed in 48-0 win over their North Queensland rivals. The Cutters were just too powerful with 56 per cent of the ball and with a 70 per cent completion rate. The Cutters made the phenomenal effort of running 1349 metres compared to 558 metres.

The Blackhawks will be searching for some positives from the game, and know they have plenty to work on before they go again against the Pride in two weeks.

The Mustangs had a 30-22 win over the Wide Bay Bulls; with the Mustangs doing more with the ball when they had it. They also made eight-line breaks which helps teams get a lot of tries as do 47 tackle breaks.

The Bulls will need to look at their defence, with 47 missed tackles putting the whole team under pressure. The side will also need to work on limiting the offloads they allow opposition teams to make.

It was a genuine 1980s score line in Rockhampton with the Capras winning their home game 12-0 in a shut-out of the Falcons.

The Capras showed excellent ball control throughout the game and the Falcons just never got in the game with a 48 per cent completion rate.

That put too much pressure on their defence; and the Capras enterprising attack came up with seven line breaks.

Wynnum Manly and West Brisbane Panthers played out another tight game at Iona College. The Panthers guarded the ball with vigilance and never let it out of their sight.

With 59 per cent of the ball and 41 tackle breaks, the Panthers were able to keep pressure on the Seagulls.

The Seagulls will be looking to capitalise on their line breaks next game.

They made eight and worked hard in defence when they didn’t have the ball, but with 41 missed tackles and 177 tackles they made life hard for themselves.

This weekend, all teams have a break for Easter and will return to action in Round 5. 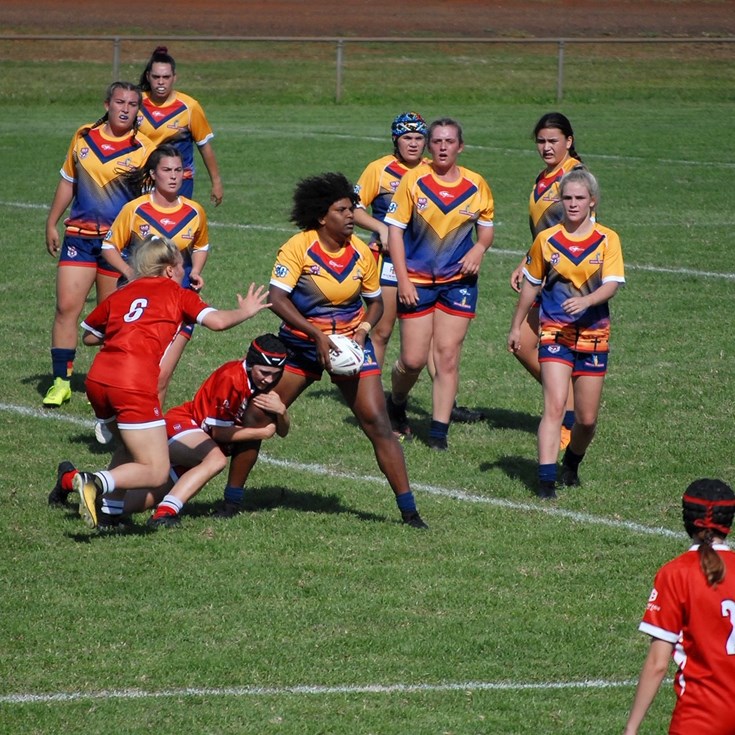 Mustangs and Falcons aim to close inaugural season on a high