There were powerful scenes right across Queensland at the weekend with community rugby league clubs doing a tremendous job to pay their respects to servicemen and women who have or are currently serving in moving ceremonies before kick-off to fixtures at the weekend.

All community competitions will break for the long weekend, which coincides with the representative weekend featuring the first leg of the XXXX League Championships - the Foley Shield in North Queensland, 47th Battalion in Central and Chairman's Challenge in the South East.

The Normanby Hounds are three from three after taking down the West Brisbane Panthers at Frank Lind Oval - the home side unable to improve their half-time score, down 24-16.

Right winger Jack Smith crossed four times as the Hounds were too good 38-16.

The Hounds have played three games and have a superior for-and-against, sharing the top of the table with Wynnum Many who have played twice plus a bye.

The Seagulls broke the hearts of the Carina Tigers with only 20 seconds remaining on the clock - a converted try to take the win 32-28 at Leo Williams Oval last Saturday night.

A ball back inside on the last tackle from five metres out from half Kyle Coghill found Tristan Hope in support to cross untouched in the dying seconds to keep their undefeated streak intact.

Valleys hosted Beenleigh in a change of venues as the Pride travelled to Emerson Park to take on the Diehards.

The home side led 20-0 at half time to win comfortably in the end 32-6, including a try to 'the face of the Diehards' Joe McGuire and the mercurial Marlon Doak returning to A Grade with a four-pointer of his own.

"We're really happy with the result as we had four players step up who played Reserve Grade the week before," Ingebrigsten said.

"Our depth this year is something that we are proud of and will continue to call upon during the year and giving players opportunities.

"But we need to improve on areas such as being smarter at times and not looking to score off every play."

Bulimba bounced back after their final minute’s loss last week to shut out Brighton 44-16 at Jim Lawrie Field, crossing eight times to the home side's treble.

Round 1 kicks off on Saturday, May 8.

A Nemani Valekapa hat-trick went a long way in the Swifts securing back-to-back wins to start the season against Goodna, joining Ipswich Brothers on top of the ladder after the Brethren knocked off Rosewood 36-16.

In the other match, Norths were too strong for Fassifern in their first game of the new season, winning 28-10.

Round 1 kick off date is yet to be confirmed.

It was a nail-biting contest at Cahill Park between Gatton and Valleys, with the scores locked at 12-12 until a late try in the 54th minute secured victory for the Hawks at home.

At Pittsworth, the visitors was too strong for the Danes - the Grace Fender double helping the Cowboys to a 32-14 win.

Sam Fa'apito was on fire for Beerwah in Gympie on Anzac Day, scoring a treble to keep the Bulldogs undefeated after six rounds.

There was also elation for Caboolture as they celebrated their first win of the season with Jackson Moule scoring 12 of the Snakes' 24 points to upset Stanley River at Woodford.

Noosa overpowered Caloundra 34-12 and competition favourites Kawana Dolphins kept their feet firmly in the winner's circle with a 58-4 domination of Nambour.

Two teams remain undefeated after Round 4 with both Caloundra and Beerwah keeping their clean sheet intact with wins over Noosa and Gympie respectively.

Nambour celebrated their first win of the season thanks to a Macey Finlay double; overpowering the Kawana Dolphins 26-16.

Hervey Bay Seagulls emerged as the only unbeaten team after the fourth round of the Bundaberg Broadcasters A Grade Premiership on Saturday, bursting the Wests Panthers bubble with a 34-24 home victory over them.

That was after Easts Magpies also had their unbeaten run ended with a 32-16 drubbing by reigning champions Past Brothers at Salter Oval, with the Brethren getting their campaign on track after having lost their first two games against the Panthers and Seagulls respectively, then having been patchy in defeating Wallaroos a week earlier.

In the early match at headquarters, much was at stake between the two teams which had each lost their first three games, and it was Wallaroos who finally broke through, accounting for a disappointing Waves 40-20 after the Tigers had raced to a 12-0 lead in the first five minutes, but then conceded 40 straight points before grabbing two late consolation tries.

“Brad has been a good player for the club over the years and has come back after having a few years off, and he is a voice of maturity in a young side,” Sommerfeld said.

“There were a few other stand-outs – the halves (Damien Otto and Bailey Robertson) were good – they guided us around the park, and Joel Cox, one of our under 18s, was also good when he came on.

The Tigers were without three of their best in captain Reece Maughan, his brother Cody, and Sam Tobin, but it is the first time since 2015 that they have lost four straight and they will need to improve greatly if they are to be contenders.

Hervey Bay however just keep going from strength to strength, and they were clinical against the Panthers, more than matching them in all departments to run out five tries to four winners and laying claim to favouritism for the title.

There will be no club fixtures this weekend due to the 47th Battalion Carnival at Salter Oval, before the Seagulls have another home game against Wallaroos on Saturday week to complete the first full round of competition.

Brothers also produced by far their best performance of the season, and they were always in control, with their master coach Andrew Hamilton winning the battle against his nephew and protégé Matt Craven, the reigning BRL A Grade Player of the Year who was again the Magpies’ stand-out with a double in a signature classy all-round display.

The Yeppoon Seagulls put on an absolute clinic at home when facing Norths; Jace O'Neill and Ray Ebsworth scoring a hat-trick each and Tom Billman crossing twice in their 58-6 showpiece against the Chargers.

A Marvin Huet double helped the Emerald Tigers reign supreme over Bluff Rabbitohs in a top of the table clash on Saturday night.

It was also a close result in the Bob Baird Shield between Dysart and Clermont with the Bulls getting on top of the Bears 28-22.

Middlemount recorded their first win of the season with a 32-22 win over Blackwater and Springsure was able to grind out a 25-18 win over Brothers.

South Kolan remain undefeated after three rounds after a 32-16 win over Gin Gin; meanwhile, Avondale were too strong for Miriam Vale 18-10.

Roma inflicted Mitchell's first loss of the season with a 20-12 triumph; meanwhile, Chinchilla were too strong for the Western Ringers 36-24 and Miles got the points over St George due to a forfeit.

A nail-biting 80 minutes at Tiger Park ended with the Souths Sharks claiming victory over the Wests Tigers 32-30.

Sam Smith was a big help scoring a double in Moranbah's 30-12 win over Carltons, whilst two tries to Ryan Schill was the catalyst for the Brethren's 34-10 win over Magpies.

And in Sarina, the Crocs just keep on doing their thing to stay undefeated; too good for Whitsunday 46-10.

Lara Burnett was on fire for Carltons in their match against Moranbah, leading the charge with a first half hat-trick to eventually win 40-10.

At Leprechaun Park, the Brethren keep their undefeated streak alive with a 20-0 defeat of Magpies.

Round 3 matches postponed due to inclement weather.

Round 3 matches postponed due to inclement weather.

In a wild and wet weekend in North Queensland, Cairns Brothers lead the pack comprehensively after four rounds, thanks to a 30-10 victory over Mareeba.

In other results, the Kangaroos were too good for Atherton and Innisfail prevailed over Ivanhoes; and the two remaining matches of the round were forced to be postponed due to the inclement weather experienced over the weekend. 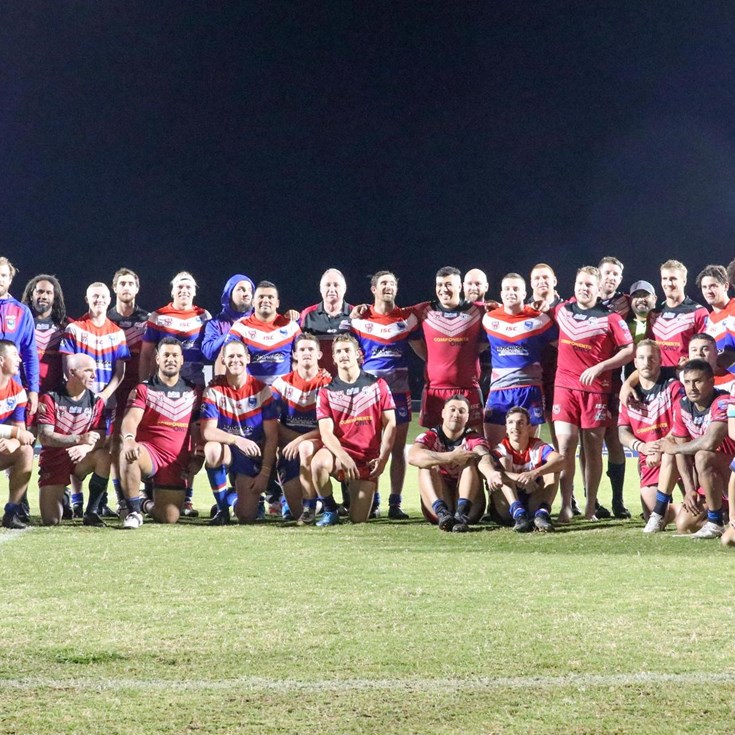