They saw an early 16-point lead evaporate and were reduced to 11 men at one stage, but the Cowboys proved too classy for the Knights in a 36-20 win on Thursday.

They've now won five of their past seven games to storm into eighth spot on the ladder after going winless for the first month.

Coach Todd Payten said his team was "controlled" when it was 13-on-13 – they outscored the Knights 36-4 with even numbers – but didn't want to give a debate about the sin-bins "any energy".

"Whether you like it or not, that's where the game's going," Payten said in reference to the crackdown on high contact.

"There was a period where they got a bit of momentum and started running really hard and I thought we didn't win enough tackles in that period," the mentor added.

"But good teams find a way to stay in the fight and wrestle back momentum, and we took another small step forward."

Payten described Taulagi's performance, in which he tallied 197 metres, four line-breaks and 10 tackle busts to complement his treble of tries, as the best he'd seen from the 22-year-old flanker.

"He's got a heap of skill and a heap of class, but the foundation of his game was built off just running hard," Payten said.

"And that's a good lesson for him. A couple of weeks ago I was showing him some clips [and said] he needed to run harder."

Hooker Reece Robson's try was sandwiched by Taulagi's first couple of four-pointers, but then the match flipped.

Sausao Sue got the visitors on the board and with Taumalolo binned for the first time in his career, Enari Tuala scored against his former club to drag Newcastle right back into the contest.

And when Burr was also given his marching orders for the second time in two weeks, Lachlan Fitzgibbon strolled through a gap to remarkably level the game leading into half-time.

To'o then put the Knights ahead when he crossed from a Matt Gidley-esque flick pass by Sasagi.

Sasagi with a pass that Matt Gidley would stand and applaud

"There's plenty of speed between those two," Payten said.

"Drinky gets across the line pretty well, he squares up, creates space for his outside runners. We've got speed and skill."

Holmes ticks over 500 career points with try against Knights

The win was capped off by debutant forward Heilum Luki barging over the line in the closing stages.

It was plain to see what it mean to the 20-year-old, who shanked his post-try celebration kick and was visibly emotional.

"His whole family is here, there was 50 of them that came down from Cairns. They're the moments that make our game so good," Payten said.

Welcome to the NRL, Heilum Luki! 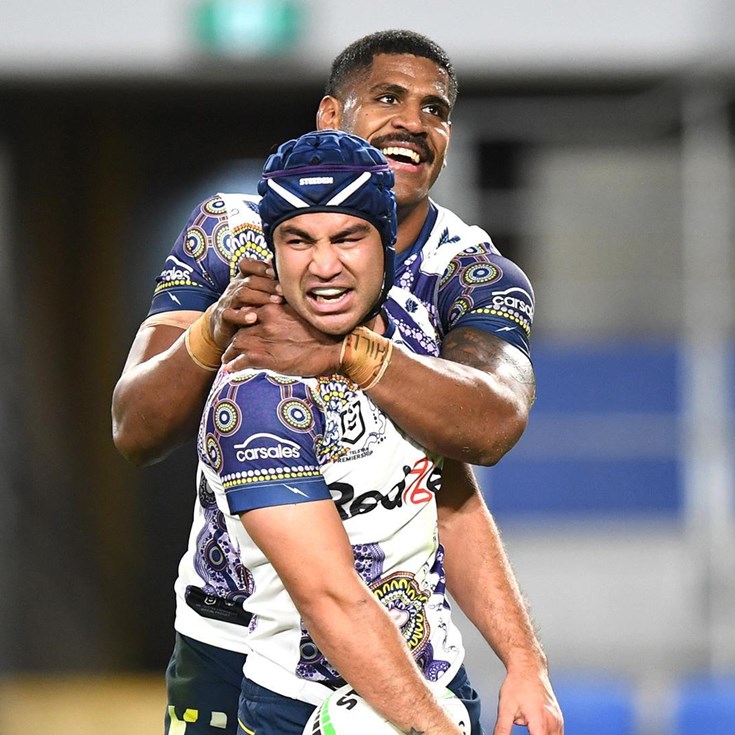