Rookie sensation Sam Walker broke Gold Coast hearts and cruelled a NRL comeback for the ages as the Sydney Roosters star snapped a superb field goal and a 35-34 win over the Titans at Cbus Super Stadium.

Titans half Jamal Fogarty had inspired the Titans to be on the verge of the equal greatest comeback in NRL history when they trailed 30-4 after 50 minutes only to lead 34-30 with seven minutes to play.

But a spectacular late try to winger Matt Ikuvalu, followed by Walker’s 35-metre field goal in the 79th minute ended what was a memorable fightback by the Titans and showed the type of composure that has the teenage Rooster pegged as a future champion.

Walker had been assisted from the field in the 47th minute when he landed heavily on his right shoulder, but came back on with five minutes to play to seal the win.

Just four days shy of his 19th birthday, he revealed afterwards it was the first field goal attempt he’d taken in his entire rugby league career.

"It was awesome, you dream about that as a young fella kicking a field goal in a NRL game," Walker said.

"To come back to Queensland and play in my home state and do it back here in front of family and friends was huge.

"As a halfback you have to take those shots. As soon as I missed the goal kick I thought I've got to make up for it for the boys.

"That was the first one I've kicked. It's pretty crazy. It was an awesome feeling once it went through I couldn’t believe it, so stoked."

In a game featuring 12 tries and some dazzling footwork by the game’s little men, Jared Waerea-Hargreaves was the real match-winner for the Roosters with multiple try-saving tackles and tireless work carrying the ball.

Waerea-Hargreaves played 80 minutes in the middle to finish the game as the Roosters leading forward with 202 metres gained from 19 carries and 42 tackles.

"People will mention how well he played but to play 80 minutes, 250 games, carry like he did, save tries like he did, that was a beast of a performance. It was just incredible to watch him play and he was the reason we won tonight."

The Titans’ 26-point comeback equalled North Queensland’s 36-28 win over Penrith in 1998 when they trailed 26-0 at half-time, but it won’t appear in any record books after the late heartbreaker.

Walker stays calm to sink Titans in a classic

In the end it was a handling error by Fogarty as the Titans were setting up for their own field goal that proved devastating, the Gold Coast co-captain lamenting one drop in an otherwise outstanding game where he scored two tries, set up two others and kicked five from six conversions.

The Titans were buried (down 30-4) until Roosters hooker Ben Marschke was sin-binned for a late shot on Fogarty in the 58th minute, the Gold Coast running in three tries in an eight-minute spree to fight back into the contest.

Fogarty had moments earlier sparked the Titans into action when he took a quick penalty tap to run 40 metres untouched as the Roosters were caught falling asleep on the job.

Proctor powers Titans into the lead

Tries to Tyrone Peachey, Brian Kelly and Tino Fa’asuamaleaui while the Roosters were reduced to 12 men brought the deficit back to 30-28 and Fogarty then put the Titans in front with a deft grubber in the 73rd minute for Kevin Proctor to score.

The Roosters levelled scores when Matt Ikuvalu launched himself into the right corner in the 77th minute but Walker’s sideline conversion attempt to win the game sailed well wide.

But Walker took his moment when it came soon after to cap his wonderful afternoon that featured two try assists, one try and the injury fright.

Robinson had planned to keep Walker on ice until they fell behind. He then called upon the rookie half to drive them home.

"He practices a lot. You know the temperament of guys, you can see guys that want the ball in the difficult moments and Sam has always proven to be that guy," Robinson said.

"It was a pretty easy decision with the shoulder to bide our time and hold on defensively.

"We couldn't and they get in front so Sammy goes back on, executes well on a few occasions and knocks his first ever field goal over.”

Robinson however did raise concerns with the referee failing to sin bin Proctor for a high tackle on Joseph Manu early in the game where the Titans co-captain almost appeared resigned to being pointed towards the sheds.

Peachey does enough, and the Titans comeback is on

The Roosters coach said the language used by the referee was confusing as it implied they didn’t use the sin bin because the player "got to his feet" rather than forceful contact. Robinson believes this will only encourage players to stay down.

"A head high would've been sent to the bin two weeks ago but we don’t want our players to lie down and then the commentating around it from referees is, 'Oh no they’ve stood up, they’ve stood up, I am OK with it’," Robinson said. 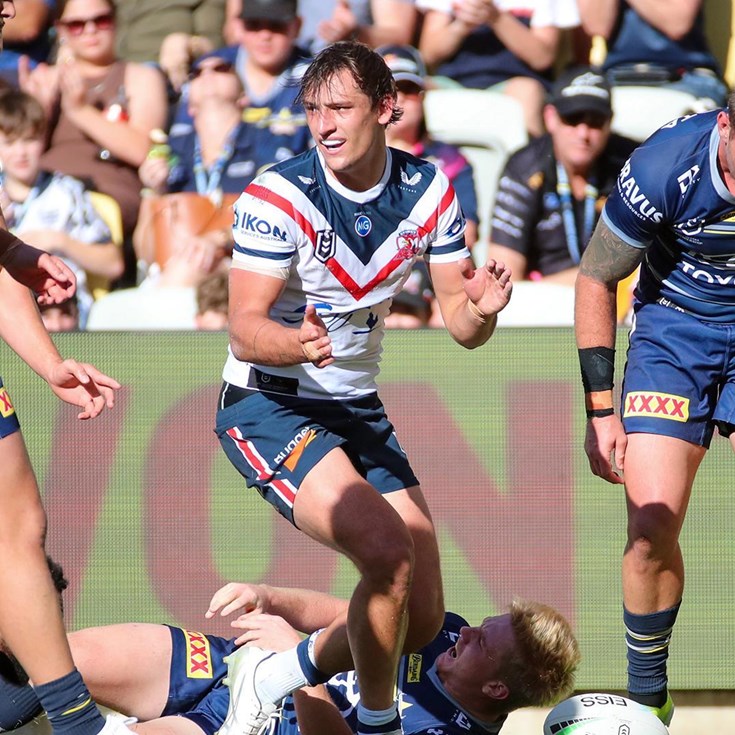