Growing up in Wagga Wagga, Ethan Quai-Ward was different from most other kids he knew as he dreamed of one day being a Brisbane Broncos player.

Nowadays, that dream is one step closer to reality with Quai-Ward - pronounced Qway-Ward - being rewarded for an outstanding 2021 Intrust Super Cup season with Souths Logan Magpies with a rookie development contract with the NRL club.

“It was a bit of a dream when I first moved up to Brisbane, my aunty took me to a Broncos game and there was a function over at the leagues club when I was younger and I got photos with Sam Thaiday, Justin Hodges... so it’s pretty crazy (to see Thaiday at Broncos training).

“Before I started pre-season, my aunty sent me a photo of me with Sammy Thaiday … it is a bit of a dream to be at a club I went for when I was younger.

“My family have followed me every step of the way, they are my biggest supporters. They follow everything, on social media or if there’s something with my name in it.

"When they saw me in my Broncs gear, they started crying..., it’s been a dream of mine since I was younger to obviously be a Bronco.”

Currently part of the squad’s ‘rehab crew’, Quai-Ward recently underwent surgery for a broken wrist - an injury he sustained in Round 19’s win against PNG Hunters.

Despite that injury setback during his first season of Cup, the West Mitchelton  junior had nothing but praise for his experience in the competition and for the Magpies who helped him rediscover his love of the game, which had dulled due to injury and the COVID-19 setback.

“I had a good year in Cup... it was the best footy I have played to date and I am obviously here now – have grabbed a full-time gig here now and so I am pretty stoked, going from a train-and-trial here to a rookie contract, so I am stoked,” Quai-Ward said.

“I love Souths... Bretho (Steve Bretherton) is a great coach; he’s a coach, but he is also your mate.

“The boys there, they are just one-of-a-kind, they get around each other, they know when to work and know when to have fun, but I loved it, every moment of it.

“I am loving it here, but pretty keen to get back there and take what I have learnt here and put that into practice at Souths and hopefully get a gig here with the Broncs.”

Not only has the talented centre been surrounded by people he grew up admiring at the Broncos, a huge career moment came when he was able to make his debut for the Magpies with someone he used to imitate as a child in his living room.

“I used to run around the house, it was crazy, stepping like Karmichael Hunt... he used to have that big goosey when he was first doing things with the Broncos, I used to try to be him pretty much,” Quai-Ward said.

“It was pretty crazy to get my Cup debut next to him.”

Hunt has since signed up to coach the Auswide Bank Mal Meninga Cup side with the Magpies next season and is likely to inspire another crop of young performers to strive for the top.

For now, Quai-Ward is learning all he can and is keen to test himself during this NRL pre-season. Having some familiar faces join him in the squad while he undergoes his recovery was also making the whole experience easier to handle.

“Pre-season has been tough, tough, tough. Some of the stuff I have done, not just physically, but mentally as well... it’s different,” Quai-Ward said.

“We get flogged... I do a lot of gym, and a lot of running and just getting myself ready to get back on the field.

“Obviously, I can still do a lot of the team stuff, the running I do with the team, so still try and stay connected with the team.

“I have come (to the Broncos) with Ezra (Mam), me and him, we’re probably best mates at Souths, and it helps coming into here with him and me being pretty close.

“I am keen to get back (training with the main squad)... got a bit of FOMO missing out on all the contact.” 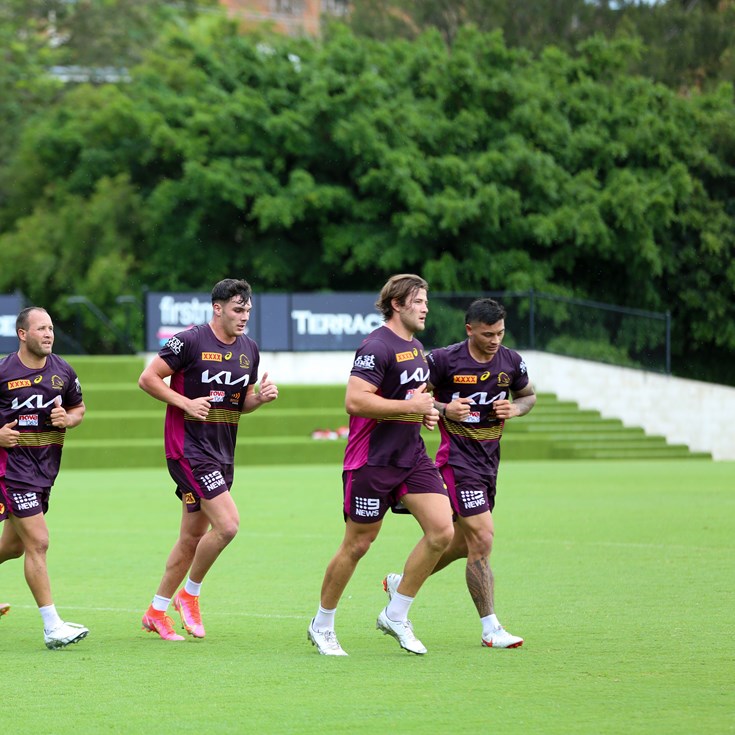