Jamie Soward admitted to being nervous ahead of his first training session in charge of St George Illawarra’s NRLW squad but he left WIN Stadium on Monday night feeling much more confident about the season ahead.

“Like everyone else at the moment we had our challenges with numbers, but I was really impressed with the girls by the way they came back, and I think everyone was just relieved to get a session under our belts,” Soward told NRL.com.

The Dragons, Eels, Knights and Roosters had their first training sessions on Monday, while the Titans had to delay the commencement of their preparations until Tuesday as some players waited for the results of COVID PCR tests and the Broncos start on Wednesday.

“I think the first couple of weeks are going be a bit hit and miss for everyone, but it was a relief when we finally got the January 10 starting date [for pre-season training] and were basically told that there would definitely be a competition for us to play and train for,” Gold Coast coach Jamie Feeney said.

“There will be some protocols that we obviously have to follow but I think everyone was really excited from them.”

Like the Titans, the Eels and Knights are preparing for their inaugural season in the NRL Telstra Women’s Premiership and Parramatta coach Dean Widders said teams would need to adapt and be innovative to cope with any scenario that may arise before the opening round on February 27.

“We are disrupted from the start due to COVID and we had a fair few players missing but we are just going to prepare for all sorts of different situations. That is how we are going to approach it,” Widders said.

The 2021 NRLW season was postponed from August until October and then February but now that the teams are in training the anticipation has increased among the players.

The Broncos won the first three grand finals in 2018, 2019 and 2020 but with no NRLW in 2021 and many players not having had any game time since last June’s State of Origin on the Sunshine Coast due to COVID, there is uncertainty about how the teams will match up.

“We have got to make sure we build combinations really quickly, which is going to be the challenging part, but I am confident that they will be right,” Soward said.

“I was pretty nervous before the girls got there because some of us had only met each other once and others had never met, because of the restrictions, so it was nice to get them out there and have a hit out and start a pre-season.

“I am lucky that I have got some really experienced players in Kezie [Apps], obviously, and Keeley Davis and Holli Wheeler. Those three girls in the WhatsApp group have been able to keep up the morale while this period has been going on.

“I drove out of training a lot more relaxed and comfortable about the direction we want to go in and closer to the vision that I have for our team.”

Soward said he was impressed by teenage winger Teagan Berry, who is renowned for her speed but weighed just 70kg when she made her NRLW debut against the Warriors in 2020, and fellow Dragons academy graduate Rachel Pearson.

“Teagan Berry, who is a young NSW Origin player who has been in our lower ranks, came back really fit,” Soward said.

“We wanted her to put on some weight and she did that so that is good, and Rachel Pearson, our halfback, is having her first season playing NRLW and I thought she was fantastic.”

Widders said the Parramatta players had also maintained their fitness ahead of pre-season training so he could focus on skills, structure and developing combinations.

“A fair few of them have gone away at Christmas and worked really hard, which is what we wanted them to do, so that was really pleasing,” Widders said.

“We put a lot of work into putting the team together, we knew a lot about the players and just getting to know them before the break put us in good stead. I thought everyone turned up in a good place and it is a good start for us but now we have a lot of work to do in the next five weeks.”

Feeney said the Titans were looking to train up to three times per week ahead of the opening round triple header at McDonald Jones Stadium on February 27.

“It is going to be a tough pre-season for most because besides their own training and programs they haven’t really come together in a team environment since State of Origin, but we are really looking forward to it,” he said. 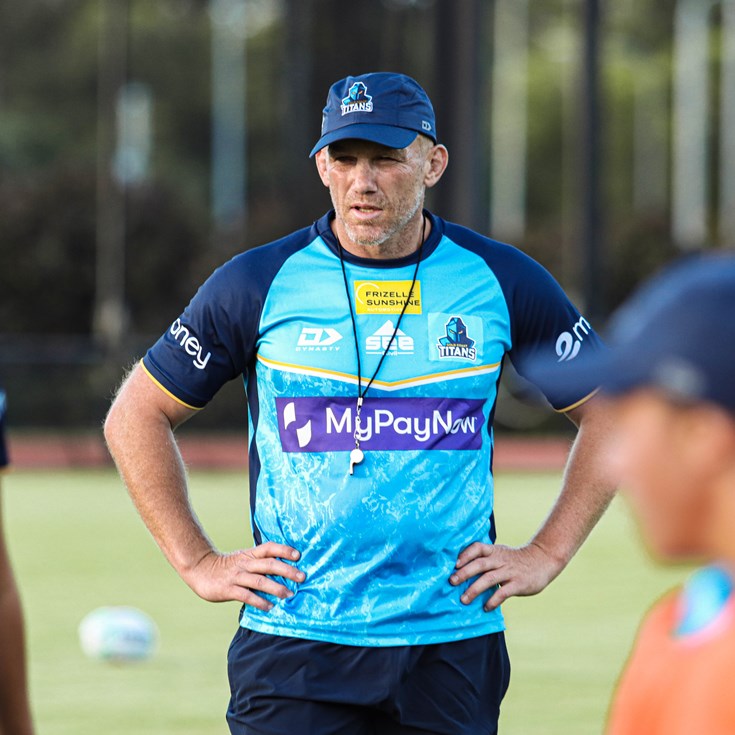