An all-star line-up has combined to officially unveil the new Queensland Maroons jersey ahead of the 2022 State of Origin series.

In a moving piece that will inspire passionate Queensland rugby league fans, former Origin greats Paul Vautin, Trevor Gillmeister and Brent Tate reflect on the significance of the jersey and what it means to them.

The legendary trio team up with current Maroons forward Tino Fa'asuamaleaui, whose words reflect his passion for the jersey and the game. 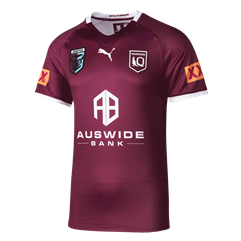 “To me the jersey means family, because I know no one will let me down,” Fa'asuamaleaui says in the official launch video.

“We belong to the jersey, and the jersey belongs to all of us.”

A modern take on the classic maroon and white jumper, the jersey features a tribute to the 40th anniversary of the 1982 Maroons, paying homage to a team featuring greats including Wally Lewis, Mal Meninga, Gene Miles and Vautin, who combined to win the first ever three-match Origin series.

It is the second Maroons jersey released in conjunction with major partner PUMA.

The official replica jersey is available now on MaroonsShop and across major sports retailers in men’s, women’s, youth and infant sizes.

Mic'd up: Slater and Norris united in maroon

Tonga: We'd have to knock on doors just to make up a team

Presented by
2 days ago