Star Cowboys youngster Coen Hess believes he is ready to take on more responsibility as the Queensland Under 20s start plotting how to break their NSW counterparts' Origin dominance with a three-day camp in Brisbane starting tomorrow (Friday, January 22).

Hess is one of only five players from last year's junior Maroons who will be in attendance this weekend with Roosters recruit Jayden Nikorima also eligible for Under 20s again this season, but unable to attend the camp.

The 25 players that are due to gather in Brisbane will be put through various team-building exercises as well as receiving an indoctrination into what it means to play Origin for Queensland from some of the greats of the game.

In stark contrast to what has happened at senior level over the past decade, New South Wales have been victorious in each of the four Under 20 Origin matches contested since 2012.

The Queensland team trailed 12-10 with 20 minutes to play last season before an injury to Nikorima opened the door for the Blues to cut loose, eventually running out 32-16 victors with Titans speedster Brian Kelly scoring four tries.

Hess, who more the No 11 jersey in honour of his good friend Regan Grieve who passed away suddenly 12 months ago, said there is a determination amongst those players returning in 2016 to turn the tables in Queensland's favour. 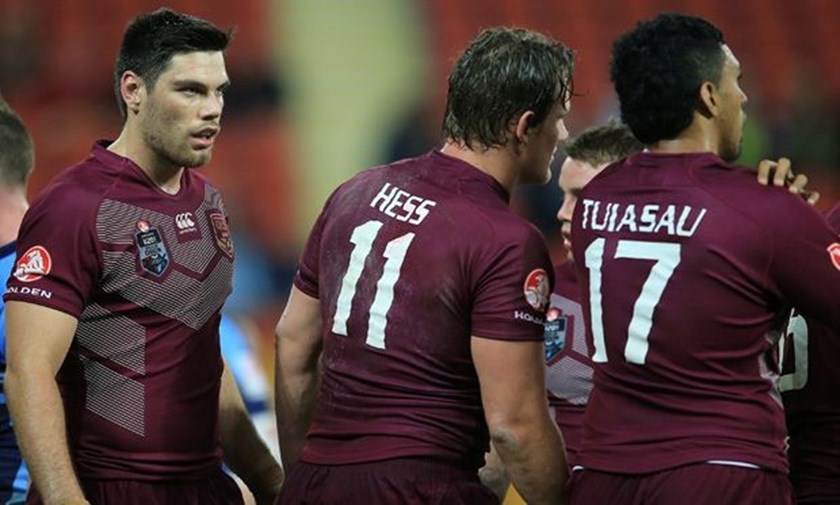 “They do [talk about it] and I guess it's a bit of a motivation for the new squad, just trying to forget the past a bit as well,” Hess told NRL.com.

“We've got new players coming in and pretty much a whole new squad so you can't really dwell on the past when you're in the present.

“We've got what looks to be a pretty good squad so hopefully we can go down to the camp, get a few training sessions under our belt, get to know each other and the culture of Queensland and hopefully break the duck.

“I guess having a bit of experience from last year I sort of know what to expect coming into the camp. It's just giving the younger fellas or the first-time fellas that haven't been to a camp like this before a bit of advice to calm their heads.

“It can be quite intimidating coming into a camp not knowing anyone – especially the boys from Sydney clubs who don't really have much interaction with us Queensland teams.”

Rabbitohs assistant coach Kurt Wrigley also serves as the Queensland Under 20 coach and said he was impressed not only by what he saw from Hess in person last year, but from what those who he spoke to had to say about the towering back-rower.

Although he refused to anoint him the Maroons captain six months out from their one and only game, Wrigley did say that he has leadership qualities that other players respond well to.

“We've got a good sprinkling of kids that are backing up again and I guess Coen is that natural leader because he played first grade last year,” said Wrigley. “I imagine he'll be leading the way for us come July when our game is.

“He's just got a good way about his preparation. I did a bit of research on him because the Cowboys moved him last year to play a bit of proper adult footy with Mackay and I knew the coach up there.

“I did a bit of research on him and how he handled himself in those different sorts of situations around different levels of people and age groups.

“He's a mature kid, got a good way about him and rips into his training as well.”

Handed his first grade debut a week after turning 19 last year, Hess scored a try against the Warriors in Round 24 and has spent the pre-season sharing his time between the NRL and Holden Cup squads.

Integral in taking the Cowboys to within one game of the grand final in 2015, Hess says his introduction to the NRL has only made him more determined to push his case to coach Paul Green throughout 2016.

“I've had a bit of a taste now so that gives me the motivation to try and be a regular in the team,” said Hess.

“I've got a lot of hard work ahead of me but it was nice to get a bit of a taste last year and that will definitely help to keep motivating me and to keep pushing myself to get a few more games under my belt.”

*This first appeared on NRL.com.au as: Hess to lead next wave of Maroons

Sharks prove too strong for Titans in the wet