Match by Match wrap of the Toowoomba Rugby League Round 1 action.

Dalby Diehards showed they will be a force to contend with in 2016 when they defeated Pittsworth 24-14 at Pittsworth Oval on the weekend. Dylan Taylor was in superb form for Dalby and kept the ball in the air to put the Danes under pressure all day.

Pittsworth spilt a few of Taylor’s kicks in the first half and the Diehards were quick to capitalise by scoring three tries to lead at half time 16-0.

The Danes exploded out of the dressing sheds after half time. Tries to five-eighth Thomas O’Sullivan and fullback Jeffrey Weber got Pittsworth back in the game 16-10.

But the Taylor brothers lifted their side to put centre Zac Morris and Brayden Alexander in for four pointers to seal the match 24-14 for the 2015 Grand Finalists.

Dalby’s Thomas Boland received the Hutchie’s Player of the Match and was excellent in defence.

“You can’t let a side like Dalby take advantage of you,” he said.  “ It was hot and the Taylor boys were crucial to the game, but we certainly take something out of the game.” 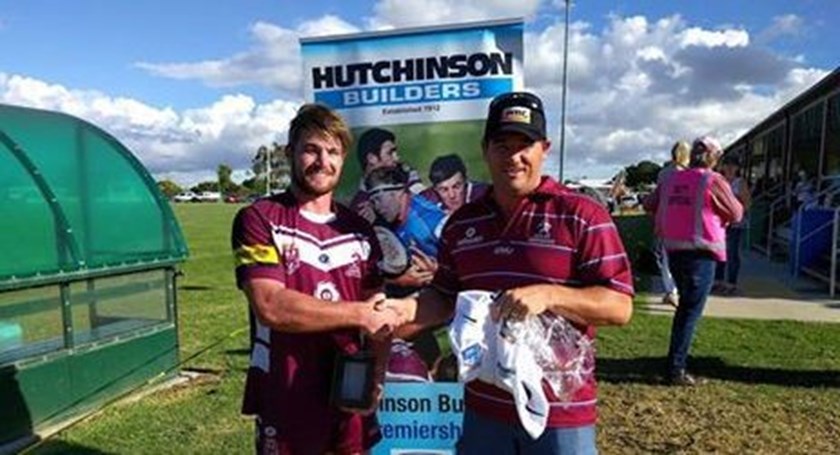 In a tough physical match where momentum swung throughout the match, Warwick snuck home 14-10 over Gatton at Father Ranger Oval on Saturday night.  Gatton got away to a 10-0 start and the Cowboys rallied to level the scores. Sam Broomhall scored his second try of the night to sneak the Cowboys in front 14-10 and Warwick hung on for the win. Cowboys president David O’Leary was thrilled with the win.

“Mick Bloomfield and Dylan Galloway were our best, but the experience of Trent Richardson and Sam Broomhall off the bench really helped us,” O’Leary said.

He also praised young players; Dan Watson and Lindsay Power who made their debuts.

Brothers lived up to their “big improvers” tag by convincingly defeating Valleys at Glenholme Park on Saturday night.  Former Dragons and Eels player Michael Witt came out of retirement to play a “one off” match for the Brethren and showed he hadn’t lost any of his skills.

The scores were locked at 0-0 until late into the first half. Then Brothers scored three quick tries to lead 18-0 at the break. They continued their momentum in the second half by scoring a further two tries to lead 28-0 after 50 mins.

The lead was too much for the Roosters who failed to hang onto the ball throughout the match. However, they did show glimpses of talent by scoring three tries in the second half to make the score respectable. Former NRL, St George, Gold Coast, London Broncos legend Peter Gill also came out of retirement for the match.

Brothers coach Liam Cullen was very pleased with his troops and said young half back Nick Trevisiol made an excellent debut and his back three, Haines, Squires and Tuite were good.

He praised Witt and Gill for helping his side and exposure for the Great White Appeal. An appeal to raise monies to pay for a neurosurgeon to be relocated in the area.

Valleys coach Wayne Barnett said that his players were their own worst enemies. He said his side was starved of the ball, but praised second rower Hnaloan Budden, who played the whole 80 minutes.

In a close affair, but Souths scored with 6 mins to go to beat Goondiwindi by 22-18. . The score at half time was 6-0 to Souths. The Tigers stretched their lead to 18-6 with 20 mins remaining and Goondiwindi showed some character to score two quick tries to level the scores at 18-18. But “Mr Reliable” Corey Blades scored for his new club to snatch the win for Souths. Coach Daniel Holmes said that Blades was good while Slade Martin’s defence lifted his side and Luke Nolan steered the side around the paddock. Holmes, himself played his first game in two years after a long layoff.

Goondiwindi coach Matt Galvin, although disappointed with the loss, said he too was proud of his side. Callum Skinner and Kingsley Mathies were his best, but generally, Galvin thought it was the one they let get away from them.

Highfields travelled to Trevor Mickleborough Field and Oakey proved a handful early. The Bears were very competitive for their tough test but Highfields led 18-4 at half time and went on to take the match 42-8.