Josh Papalii will be channeling the angry maroon ghost of Carl Webb's Origin career when he starts at prop for Queensland for the first time at Suncorp Stadium on Wednesday night.

The 26-year-old Raiders enforcer has started in just one of his 11 Holden State of Origin games and that was in the second row.

He last started as a front-rower at club level back in 2015 when he started in five matches for Canberra at prop, the only occasions he has done so in his professional career.

It was former Cowboys hardhead Webb's performance in the opening match of the 2005 Origin series that had Papalii revved up in Maroons camp this week.

Webb, who came off the bench with a hairstyle as wild as his impact that night, took on NSW prop Luke Bailey on several occasions in a confrontation that included an infamous choke hold on the Blues legend's throat.

"I was a big fan of Carl Webb because he played that ruthless kind of footy that I really like," Papalii told NRL.com.

Cooper: We owe it to Queensland

"I'll never forget when he took it to NSW with that massive big 'Q' marked into his head.

"That's the way I want to go about my business.

"I hope to make a real statement and go as hard as I can for as long as I can.

"I really want to represent the people who wore the jersey before me and to inspire the boys that come after me."

While lock and prop are often interchangeable in the modern game, Papalii was not underselling his new role as the Maroons aim to prevent a NSW clean sweep.

"Kevvie [Walters] has given me this new role and I need to perform," he said.

"There is an expectation on me as a starter now and I need to do the job for Queensland.

"I can't wait to run out alongside Jai Arrow after J Wal [Jarrod Wallace] and Naps [Dylan Napa] laid the platform for us in the first two games.

"Jai keeps it simple. He's tough and goes all day."

Papalii is not one to absorb himself in rugby league matters when he is not playing.

The public knew on Monday that he was starting in game three before he did.

"I only found out yesterday (Tuesday) in camp. Kevvie only told me before our team meeting," Papalii said on Wednesday.

Playing in the national capital you'd think Papalii would be used to cold weather but despite mild and sunny conditions in camp he was rugged up in a track suit top and a beanie. He said there was another reason he was cold.

"Ever since Kevvie told me I'd be starting I've had the chills, and that won’t stop until I play," he said.

"I'm not sure what he is thinking but I will try and do what I have off the bench, only a bit earlier."

Maroons back-rower Gavin Cooper said Papalii was cut out for the new assignment he now has in the side.

"He is just tough, he plays tough," Cooper said.

"He doesn't like to talk too much, he just leads by what he does and he is part of a big pack in Canberra.

"I have to play against him next week which won't be fun.

"He has played a dozen Origins now and every time he has put on the jersey, he is going head first into collisions and that's the way he plays.

"There's not a whole lot of people who bring his toughness. There is no slowing down to whatever he does." 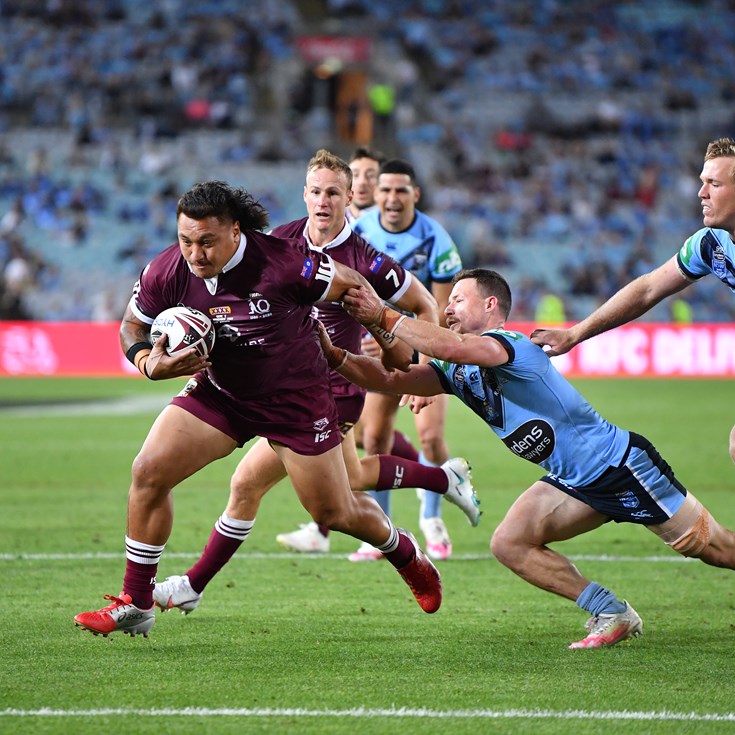 Papa won't preach to Tino about toning down aggression