Matt Scott has learned the lessons of a horror 2018 pre-season and the Cowboys prop is confident he can finish his career the same way his role model Petero Civoniceva did.

The 33-year-old had successful neck surgery in October and his training is progressing smoothly as he targets returning to contact drills in the coming weeks.

It's an important step in his plan on returning to the form that made him one of the first forwards picked for Australia and Queensland for the best part of a decade.

When the 251-game veteran spoke to NRL.com in Townsville he outlined the learning curve he'd been on during the last two seasons.

He spoke about what went wrong on the road to recovery, and how he put it right.

Scott played just two games in 2017 before rupturing his ACL and sitting out the rest of the year. The following off-season included a cavalcade of setbacks.

"It has been really disrupted the last two years, where I've never really felt comfortable for any period of time," Scott told NRL.com.

Barba: This is the light at the end of the tunnel

"Last pre-season I broke down a lot. I was coming off an ACL and really wanted to hit the ground running but I over-trained in the off-season.

"I tore my calf twice. I had trouble with my hammie a few times. I had a couple of epidurals on my lower back. That really showed at the start of last year where I was pretty slow to start.

"The team was the same, which didn't help because we weren't able to get into any rhythm."

Scott had some strong games for the Cowboys before a recurring neck injury forced him to take a six-week break during the middle part of the season.

"It wasn't until I had that break and then came back that I started to play some good footy," he said.

After the successful neck operation, this pre-season has been a complete reversal of the last.

"It has been so much better. I just learned that I probably couldn't do what I used to be able to do in terms of the way I pushed my body through the off-season," Scott said.

"Age catches up with us all. I've learned that you've got to train smarter, not harder. I'm already a lot fitter than I was last pre-season and concentrating a lot more on recovery and looking after myself. So far, so good."

Scott learned at the feet of the evergreen Civoniceva in the formative stages of his Origin and Test careers and intends to emulate the Fijian international and play quality football into his mid-30s.

"Petero has been a huge inspiration to me throughout my whole career. He was my first roomie in my very first Origin camp in 2006 and just the way he is as a person, the way he goes about his business and how professional he was really opened my eyes," Scott said.

"That is why he could play so well for so long, and that certainly does give me a bit of hope that I can do the same.

"I am pretty confident in my ability, so as long as my body stays good and I can stay relatively injury free it is a big goal of mine to emulate the way Petero finished his career."

Last pre-season I broke down a lot ... I over-trained in the off-season

There is no doubt the Civoniceva example is one that Scott has lived and not just admired. It is why he remains confident his goal of finishing his career on a high is within reach.

"I've always tried to be really professional and something I've really prided myself on is how much work I do away from footy on getting my body right and making sure my diet is good. I do plenty of recovery and extra work away from the club," he said.

"It has stood in me good stead over the years and it is what I am relying on to help finish my career off on a positive note."

The signs are also promising that Scott can hit the high notes with a successful Cowboys side. While 2018 was a season of disappointment for North Queensland the acquisition of leading players Josh McGuire, Nene Macdonald and Ben Barba has strengthened the squad.

Jordan Maclean and Michael Morgan are both on deck again after injury-ravaged years. Scott believes the middle-forward rotation has potentially more firepower than the premiership winning side of 2015.

"We had a really good mix when we won the grand final. We had Jimmy Tamou, myself and Jase to start the game and then Benny Hannant and Scott Bolton off the bench were outstanding," Scott said.

"It seems like this year we have got that type of mix again but potentially even better with Jordan and Moose [McGuire] in the side. They are two world-class players.

"It is really exciting to think about what we can do as a pack. We showed last year that a team on paper isn't always going to translate onto the field but it feels like this year is probably one of the better mixes of teams we've had over the years."

If all goes to plan for Scott he will make a decision on his playing future later in the season although he has still left the door open to possibly play on beyond 2019.

"I don't want to make any announcements and I don't want a big send-off, so I will be happy to see how the year goes and how my body is feeling," he said.

"If I feel healthy in terms of injuries, then I don't see why I shouldn't play again." 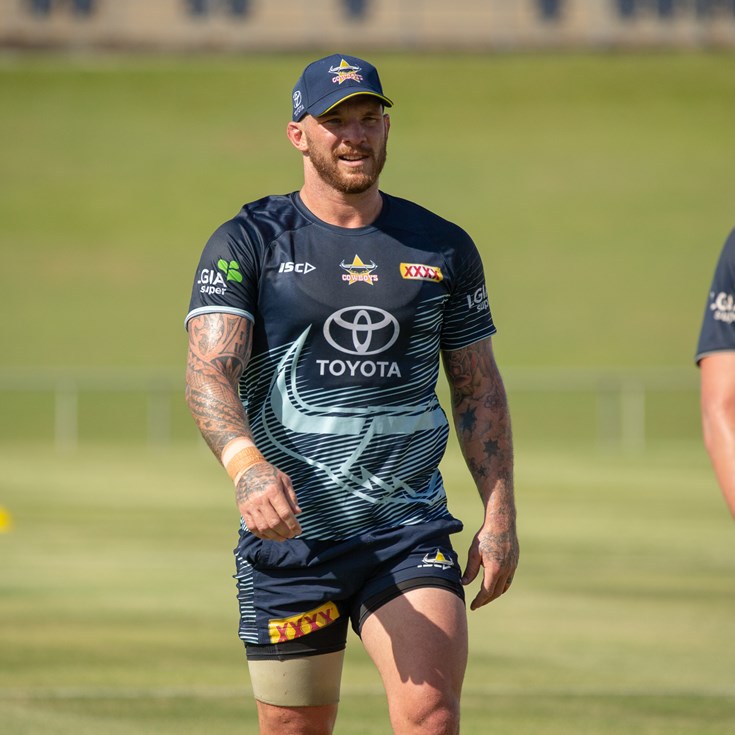