A new era dawns for the Cowboys with Johnathan Thurston's retirement.

Thurston is essentially irreplaceable but Cowboys coach Paul Green will lean heavily on Michael Morgan and put his faith in Te Maire Martin and Jake Clifford to fill the void.

Matt Scott's presence can't be underestimated after his 2018 campaign was derailed by injury, while the arrival of ex-Broncos enforcer Josh McGuire should have the desired effect.

The Dragons were in the hunt for the minor premiership all season before finishing seventh - one of four teams on 32 points.

They only had themselves to blame for blowing it against the Rabbitohs in week two of the finals and coach Paul McGregor is hoping the arrival of Corey Norman from the Eels will provide important depth in the halves.

Cowboys: Star recruit Josh McGuire has been promoted to the starting side an hour before kick-off with Gavin Cooper switching to the bench. Ben Hampton and Enari Tuala were the last two men omitted. Cooper has scored a try in his past nine NRL games and is looking to extend his own record out to 10 consecutive games. Jake Clifford and Gideon Gela-Mosby were omitted from the extended squad on Friday night.

Dragons: The Dragons are 1-17 with Zac Lomax and Josh Kerr dropping out an hour before kick-off. Winger Mikaele Ravalawa will become the 218th player to make his club debut. Corey Norman (#219) will start at five-eighth. The Dragons have won their past three games against the Cowboys. Reece Robson and Jonus Pearson were omitted 24 hours before kick-off

Gareth Widdop v Jordan Kahu: Neither of these men was a fullback last year but each now finds themselves as a first-choice No.1. In Widdop's case it's due to the club recruiting Corey Norman, with Matt Dufty still pressing for a chance. Widdop has played there before, including for England, but will need to make sure his fitness and work under the high ball is up to scratch. Kahu has also been a Test fullback for New Zealand but not so often at club level, where he has largely played wing and centre. He has a chance at a new club due to Ben Barba's sacking but it is his ball-playing ability that will need to get up to speed quickly.

Michael Morgan needs to grab this team by the scruff of the neck and drag them into the post-JT era. Just as the great man Thurston did on countless occasions the new skipper will look to inspire by his actions as the Cowboys look to right the wrongs of 2018. If Morgan takes control and plays like he did during the 2017 grand final charge then his team mates will get on board and the home fans will rise.

The Red V need to put their off-season drama behind them and channel the spirit that wiped Brisbane out in week one of the finals and took them within an ace of upsetting Souths. This is one proud club and they’ll need every bit of that renowned fighting spirit if they are to prevail in enemy territory. Tariq Sims was unstoppable in that Suncorp Stadium demolition last September and he needs to lead the forward charge.

All the Euan Aitken critics out there need to take a chill pill. He's a damn fine player, who was on the verge of State of Origin selection last year. Big and strong, he can be a difference maker for St George Illawarra in 2019.

The Cowboys have probably got the best forward pack in the competition. We didn't see much of Matt Scott and Jordan McLean last year and Jason Taumalolo moving to an edge will probably keep him fresher for late in games. The Dragons also boast a very strong pack – I can't wait to watch these middle forwards sort each other out. I think the signing of Corey Norman will be huge for the Dragons. This will be close.
Cowboys by 2

The JT effect will be felt in full force by North Queensland if the numbers are anything to go by. Despite the Cowboys being in contention for the wooden spoon until late in the year, Thurston ranked first in the NRL for line engaged runs (142 for the year at almost six per game), try assists (23) and line break assists (24). Michael Morgan produced career-best form when Thurston was absent for their 2017 grand final run, and will need to get back to his best quick smart in his return from injury.

St George Illawarra exploded out of the blocks last season, holding top spot on the ladder for the first 11 rounds on the back of some terrific attack. They led the league for tackle breaks in 2018 and ranked fourth for points across the entire season behind Souths and the two grand finalists. The Cowboys will have their work cut out of them to contain the Red V on Saturday.

Add your team's draw to your calendar 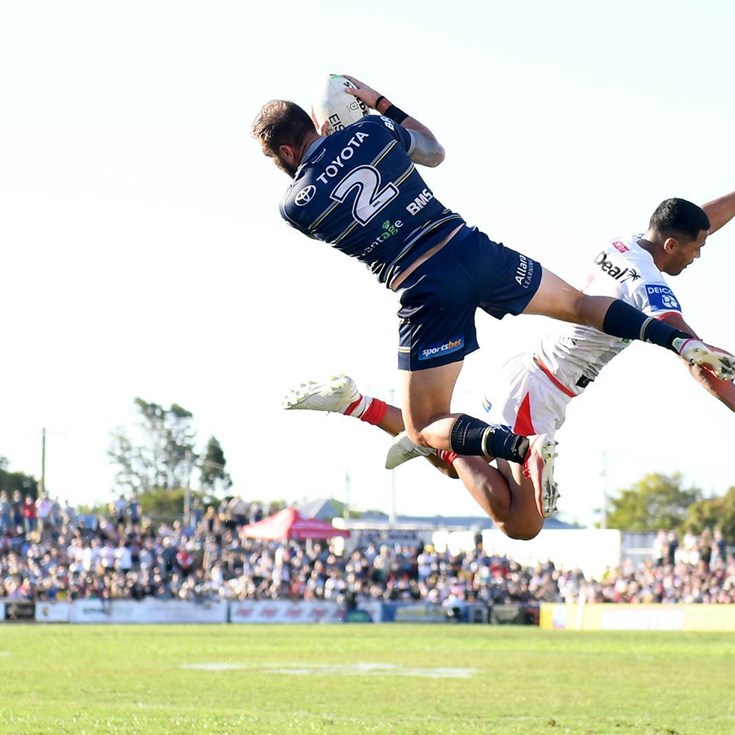