Cooper Cronk showed Ryley Jacks exactly how to succeed in the NRL and had no idea he was even doing it.

Like the studious carpentry apprentice that he was coming out of the under 20s, Jacks arrived in Melbourne at the end of 2016 and immediately went to work learning from a man with a masters in play-making.

Given the haphazardness of the Titans' attack when they were forced to play 68 minutes against the Raiders without Ash Taylor and Tyrone Roberts, having Jacks waiting in the wings is the ace up coach Garth Brennan's sleeve that he knew he would need to pull at some stage in 2019.

His preference would have been to wait longer than round two to use it, but with Roberts set to miss three weeks and the uncertainty surrounding Taylor's quad injury, Jacks now has the perfect opportunity.

More than anything they need a calm head who can put the structure they have built all pre-season into practice and Jacks took lessons from the very best.

The 26-year-old Queenslander spent the first seven games of his NRL career as Cronk's halves partner and said his education extended far beyond what happened over the course of 80 minutes.

"Cooper was massive. I followed him around a lot," Jacks told NRL.com of his single season as Cronk's teammate in 2017.

"I'd watch what he was doing before a game and after."

After two years in the Roosters' under-20s system, Jacks was playing for Burleigh in the INtrust Super Cup in 2015, convinced his NRL dream would not come true.

A move to the Sunshine Coast Falcons in 2016 provided a pathway to the Melbourne Storm where he made his NRL debut and played 25 games over the past two seasons.

He returned to the Gold Coast in the off-season a vastly different player and one who carries with him the simple philosophy employed by Storm coach Craig Bellamy.

"Getting to be in that system for two or three years was unreal, you just learn so much," Jacks said.

"I feel as though I'm a totally different player to what I was in '15," said Jacks, who has guided Tweed Heads to two straight wins to start the season.

"They strip it right back as soon as you get there. It's all about basic stuff.

"I was a bit surprised when I first got there how simple it was. You've just got a few jobs that you need to do but you've got to nail them.

"That was the first thing, your fitness and your basic catch-pass. You'll work on that for pretty much the whole start of pre-season and then you start getting into more specific things when you start playing.

"But they strip it right back and start from the start, which I didn't think NRL clubs would do."

"Nailing" your job and "stripping back" the game is apt terminology for a young man who is a qualified carpenter, his time on the tools not excusing him from the initiation all Storm players are subjected to.

"As soon as you get down there you've got the two weeks on a construction site during the day and then train in the arvo," Jacks said.

"For me, that was pretty much what I did for four years so when I got there I was a little bit upset. I thought I'd just become a full-time footballer and then I've got to go back to work.

"You do two weeks of that and then you're off to the torture camp for three days of hell."

He returned to the Gold Coast determined to play his way into the starting side for round one but a hyper-extension of his elbow came at the worst possible time.

"Three weeks in a brace which was probably the last thing I wanted after doing a full pre-season," Jacks said.

"That was hard, having to watch the rivals for your spot go out and train."

He missed the opening trial against the Cowboys as Roberts captained an inexperienced team and then played the second half against the Broncos as the Titans gave up an 18-0 lead to lose 25-22.

But he gets his chance against the Sharks on Saturday afternoon determined to put his classes with Cronk into practice. 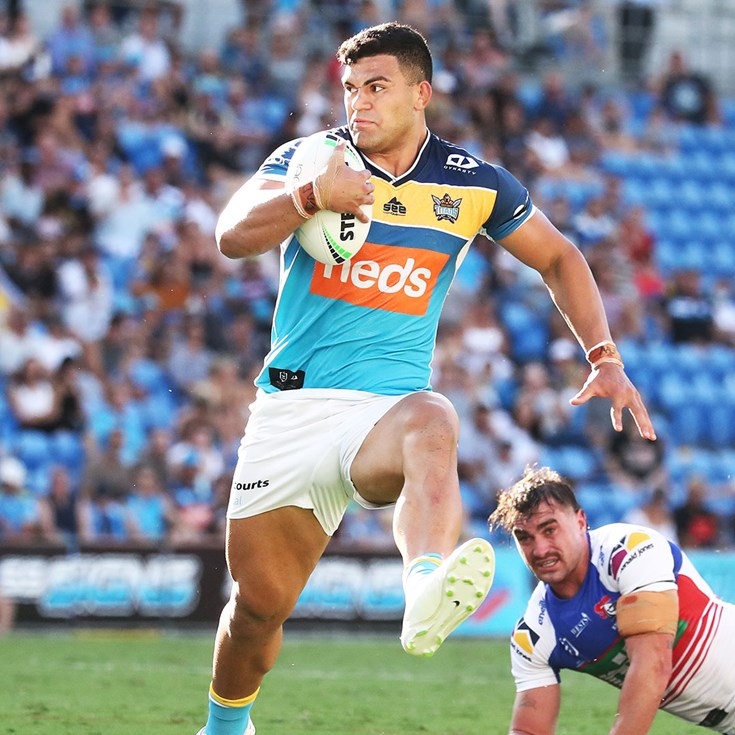