Young Cowboys half Jake Clifford will be out for redemption against the Raiders this weekend after declaring he has plenty to fix up following last week's loss to Cronulla.

The Tully Tigers junior wasn't the only player who left room for improvement in that second-half capitulation but on Wednesday offered an honest self-assessment, saying he "has a lot of things to work on".

"I've got to work on defensive stuff and getting my hands on the ball," Clifford said.

"It was a big game, especially my first one of the year, it definitely felt a lot more comfortable coming into the game and knowing what I had to do. It's good to be back playing with the big boys."

Coach Paul Green has called for Clifford to stay in the game for eighty minutes and not drift in and out like he has.

"Fatigue comes into the game, mentally you've got to push through that and do extra to help your teammates," Clifford added.

"Not necessarily getting my hands on the ball but being around and looking like I'm ready to play."

Clifford said Te Maire Martin, who played in the number six alongside Michael Morgan in rounds one and two before being moved to fullback, has offered help and feedback at training.

"[Martin] might find things that would be beneficial for me, if we see something we can work on we always share our thoughts and I take it onboard," Clifford said.

Justin Hodges recently suggested that Michael Morgan should move to five-eighth because of his running game and Clifford move to halfback. Clifford responded by saying he's "happy with the way things are".

"If he [Morgan] sees space he's going to run the ball. I don't think it's going to change much with Morgo at seven or six. He's going to be a leader, he's the captain," Clifford said.

Prop Matt Scott believes there is not much difference between the two positions, particularly with the structures the club plays.

"I probably would like to see Morgo get his hands on the ball a little bit more [but] in saying that we have to lay a platform for him to do so and that'll come with time," Scott said.

"It's getting used to each other and making sure that he's playing off the back of some positive footy."

Forward Coen Hess also reflected on the Sharks loss, saying he personally felt "a bit down and embarrassed".

"My effort plays could've been a bit better and I think showing a bit more urgency," Hess said.

The Cowboys will play a Raiders side which boasts an in-form pack and some nifty backs, with Hess identifying hooker Josh Hodgson as a danger man on Saturday.

"[Hodgson] can sniff out an opportunity," Hess added.

"If he can get out and sense if we're a bit lazy or we're not back ready in time they'll pounce on that. All over the field we'll get tested but especially down the edges for myself." 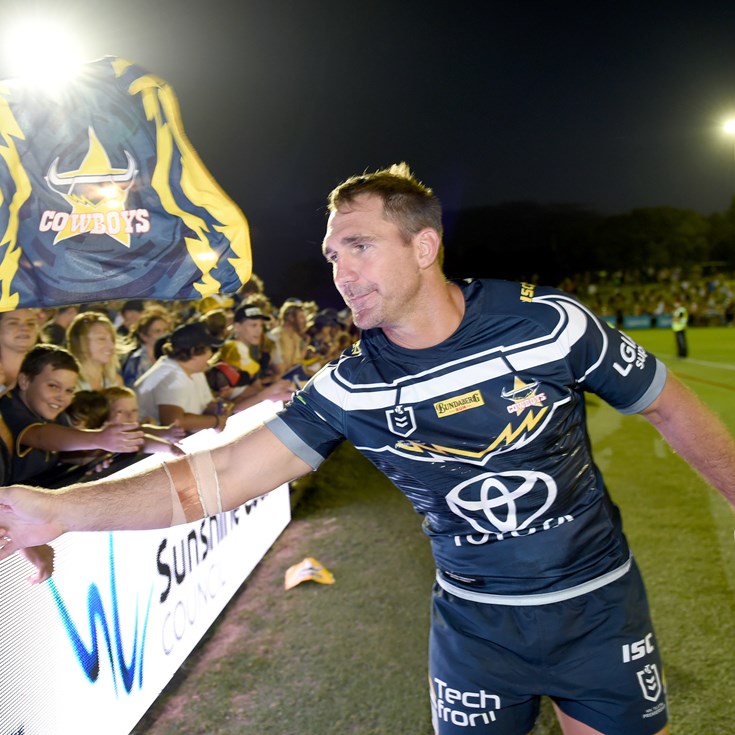