The Anzac round of matches, be it in the NRL or Intrust Super Cup, has become special for rugby league with extra emotion, desire and honour surrounding the on-field ‘battles’ from Anzac Day through to Sunday.

And for the Tweed Seagulls it has become personal too, through the connection of their strength and conditioning coach Micheal Hamer and inspirational Afghanistan medic McQuilty ‘Coco’ Quirke, who was brought back to life three times before surviving an ambush bomb attack on his recovery vehicle in August 2011.

Corporal Hamer, a physical trainer instructor at Canungra’s Kokoda Barracks known to all as ‘Hammer’, was Quirke’s physical training instructor in Townsville and trained him for his assignment in Afghanistan.

They were also football coaches together in the Army teams and share a great passion for the game.

When Quirke was returning from picking up casualties in the Afghan war, his vehicle was hit with a bomb and he was hurled 30 metres down the road, landing on his head and laid there for two hours being comforted by colleagues before being able to be airlifted to hospital.

For four minutes while on the road he was clinically dead, brought back to life by his mates; he suffered the same fate on a helicopter soon after, before massive amounts of blood were pumped into his body, and again on an emergency plane which took him to Germany for specialist treatment.

A first-grade player at Bowen at 16, he turned 31 two days after the incident and was told he would never run again.

Quirke’s refusal to concede medical predictions, his long tough journey to beat Post Trauma Stress Disorder (PTSD) as well as his physical hurdles, has seen him able to become a nationally celebrated advocate for post-battle recovery and addressing depression.

And he’s an inspirational figure in Hamer’s life.

Hamer, who had been deployed to Timor and Egypt, invited his mate to address the Seagulls before their match against the Mackay Cutters in Mackay last year, when they had started to find a little form after losing the first five games of the season.

Skipper Cheyne Whitelaw, who will unfortunately miss Sunday’s clash with Ipswich at Piggabeen after suffering concussion, said he’d rarely seen a group of footballers so captivated by a speaker as the Seagulls were at their hotel the morning of last year’s clash.

He said the side was so motivated they went out and crushed the Cutters 52-24; they led 46-6 with 10 minutes remaining.

Quirke has been invited back and will address the Intrust Super Cup side and Hastings Deering Colts at training Friday and will be in the dressing rooms on game day for a round that Hamer has made even more significant for the club.

Their fitness boss has posted the photos of the 41 Australian servicemen and women who lost their lives in the 10-year Afghanistan campaign on the dressing room wall and had an Anzac Day round trophy struck which is awarded to Tweed Player of the Match, selected and awarded by Quirke.

“It was awesome, everyone really stopped and listened to every word and it’s not often today anyone can do that, we were pretty awestruck to be honest,” Whitelaw said of last year’s time with Quirke.

“It all was connected back to the team and helping your mates no matter how tough it gets. Footy is nothing like war and what he and his mates had to go through and we can’t overlook that. But he sort of brought aspects to the two worlds together and made us feel like family.

“A lot of the boys can’t wait to catch up with him again this weekend.”

Quirke, who joined the Army at 19, said the opportunity to share his story – and those of others – is therapeutic for him.

Married with two children, he somehow got through massive trauma after his brush with death and left the Army in 2017 after undergoing a university degree; he now works as a motivation and resilience speaker/mentor to soldiers going overseas or those considering transitioning out of the armed services.

He also works in a part-time role for the NRL mentoring youth and doing some coaching.

“The Seagulls have become my (Intrust Super Cup) team even though we have the Blackhawks here in Townsville; I watch them on TV anytime they’re being played and check out the highlights every week,” Quirke said.

“I had a really good time when I met up with them and it’s good for me to tell my story. It helps me process it every time because I don’t have any memory of the event itself, other than the flash and three shadows standing over me which were the first three boys who saved my life.

Being able to tell my story and help others build resilience and benefit from my life experience makes me feel really good, even though it’s quite mentally draining.

“It’s great to get a chance to meet people who know Hammer well outside of the military too. It’s amazing to see what respect they have for military personnel, and those we lost. They played amazing football and I felt so comfortable in their environment.

“They’ll do it again this Sunday too, I know it because Hammer and Woolfy (coach Ben Woolf) will drum into them the need to pick up the one-per-centers that let them down last weekend.”

Hamer says Quirke is universally recognised in the Army as a selfless survivor who has the ability to pick others up.

“When we got news that Coco was injured and nearly died, it was incredible the response right through our ranks; anyone who is anyone in the Army knows Coco - he’s just such a great, inspirational bloke” Hamer said.

“Most military remembers just look up to him, not just for how he survived and defied his injuries but how he just wants to help others.

“When I’m feeling down I call him because I know he’ll put everything into perspective and get me going; he just shunts out any negativity in his life after all he has gone through.

“We have a lot of new players from last season who don’t know him and they’re going to be blown away.”

FOOTNOTE: For Seagulls players who get driven mad by Hamer’s military-like discipline, Quirke revealed he wasn’t a bad footballer. “I got him to play a few games for my Army team and he was a very good ‘heads up’ hooker with a bit of pace. He went alright!” 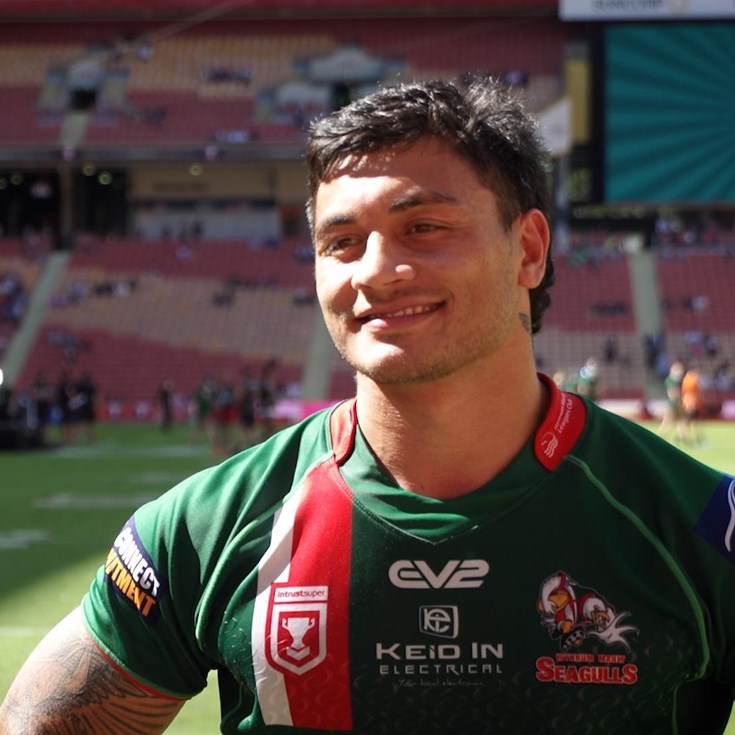 Olam gets hat-trick in Falcons win over Tweed

Gulls come out on top in seesawing game with Jets