Xerri was awarded the 76th minute try after a bomb from five-eighth Shaun Johnson bounced 20 metres out from the Dragons line and he re-gathered it to score.

However, the 13,652 crowd had to endure a nervous wait as review officials studied video replays to determine whether the ball had deflected off the outstretched hand of Cronulla second-rower Wade Graham.

Commentators believed the ball changed course before Xerri caught it, indicating Graham had touched it but the bunker backed the on-field call of referee Adam Gee. Wade Graham admitted in an on-field interview with Channel Nine that the ball had touched his arm.

Had the Sharks succumbed to a St George Illawarra team which ran out of interchanges after losing Tyson Frizell, Ben Hunt and Patrick Kaufusi to concussions, it would have been a major blow to their finals hopes.

Instead, Cronulla have now leapfrogged Penrith into eighth position on for-and-against and are just one point behind seventh-placed Brisbane, who beat the Panthers on Friday night.

Cronulla had more than enough opportunities in the first half to put an early end to the contest but they only led 12-6 at the interval after the Dragons somehow found a way to stay in the game.

The Sharks dominated field position and possession, commanding a 61% share of the ball when prop Aaron Woods finally broke through for the first try in the 18th minute of a Jayden Brailey grubber.

With St George Illawarra defending their own line for four consecutive sets at one stage, it appeared as if the dam wall had been broken when winger Sosaia Feki scored three minutes later after a long-range Wade Graham break.

Dragons fullback Corey Norman managed to round up Graham as he slowed for Brailey to loom up in support on his inside, not realising he had speedster Bronson Xerri on his outside.

Norman then made another try saving tackle on Xerri in the 28th minute with a crunching hit that forced a wayward pass from the teenage centre to five-eighth Shaun Johnson and St George Illawarra again had a reprieve.

A one-on-one tackle by Norman on Feki stopped another likely Cronulla try five minutes later and the Dragons had their first scoring opportunity of the first half when winger Zac Lomax grubbered into the in-goal on the next set.

Lomax was unable to get to the ball before it went dead but a grubber from his right edge centre partner Euan Aitken paid dividends when interchange forward Jackson Ford scored his first NRL try in the 36th minute.

After losing second-rower Patrick Kaufusi to a concussion in the first half, the Dragons were reduced to 15 players just four minutes after halftime when halfback Ben Hunt was forced from the field for a HIA.

Hunt had received a boot to the head from Ford as the Dragons tried to stop Matt Moylan stepping his way across the try-line and he was unable to return, leaving ball-playing forward Luciano Leilua to assume a play-making role.

It wasn't long before Moylan joined them after succumbing to a hamstring injury in the 50th minute but there was more trouble to come for St George Illawarra after Tyson Frizell was concussed in a heavy tackle.

McInnes with a try saver of the year nomination

The loss of Frizell left Dragons coach Paul McGregor with no interchanges as he was forced to use three of his eight to replace concussed players but Leilua levelled when he swivelled his way across the try-line in the 65th minute.

Xerri looked set to regain the lead for Cronulla nine minutes before fulltime but St George Illawarra hooker Cameron McInnes produced an incredible try-saver, wrapping Xerri up and preventing him from grounding the ball as they rolled together in the in-goal.

However, Xerri was awarded the match-winning try five minutes later after the Bunker ruled that a Shaun Johnson kick had not been touched by Graham before it bounced into the arms of the Xerri and he crossed unopposed. 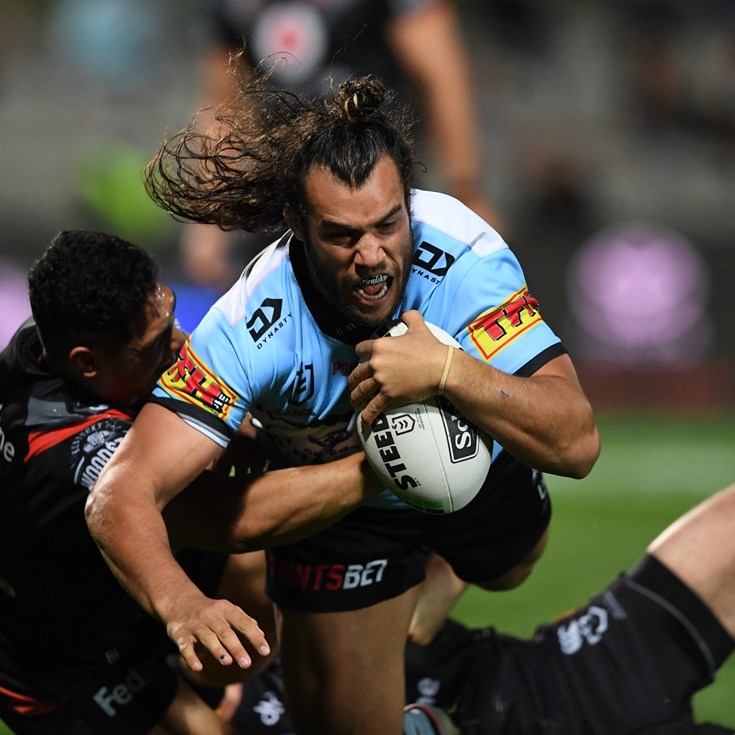 Hunt sets sights on Origin as he celebrates 250-game milestone