Storm captain Cameron Smith says the criticism his club gets over their tackling techniques won't serve as extra motivation during the finals.

Smith received a concerning act notice from the NRL following an incident involving Canberra winger Bailey Simonsson last month and his teammates have also come under the spotlight from a host of rival clubs in the build-up to the finals.

Smith said he expects the criticism to come from across the northern states at this time of year.

"It is expected now that at this time of year for all the articles that start coming out from up north," Smith said at AAMI Park ahead of the Storm's round 25 clash against the Cowboys on Friday night.

"I have been a part of Melbourne Storm for over a decade now and we always hear those stories.

"I can't control what is said about my team and myself ... when they try and drag family into it that is pretty low journalism.

"At no point should any athletes' family be brought into media or to try and drive agendas.

"I am used copping a bit of criticism at times ... it is part of our job. Whether that is right or wrong is for other people to decide.

"All I can control is what I do on the weekend and what I do here at training every day."

Smith said the Storm will continue to play the same way on defence unless they league NRL says they have a problem with what is happening.

I am used copping a bit of criticism at times ... it is part of our job

"The media and journalists don't write the rules ... if they want to critique my defence or any of my squad member defence that is their opinion," he said.

"We just listen to the NRL and they have got no issues about how we go about things."

Smith said he was feeling refreshed on the eve of yet another finals series and he believes the league leaders are well placed to go one step better than last year's runners up finish behind the Roosters.

Smith said the club's decision to field a strong side against the Cowboys on Saturday night despite already having the minor premiership safely in their keeping was a sound idea.

"I remember the final game of 2011 we were playing at SFS [Sydney Football Stadium] against the Roosters and Craig [Bellamy] thought it was a good idea to remove four or five of us an hour before kickoff and we ended up suffering a pretty heavy loss," he said.

"It probably took a bit of momentum that year and we lost a prelim here [at AAMI Park], so it is important we go out and play our best footy."

One player catching the eye of Smith of late has been dynamic fullback Ryan Papenhuyzen.

The rising star has run for more than 200 metres in each of his last two appearances.

Smith likes what he sees in the 21-year-old and believes there are many similarities to the way that Storm legend and recently retired fullback Billy Slater went about his business.

"He is quite similar to Bill in his early years ... he plays with a lot of speed and is quite raw," Smith noted.

"I see some of the stats he has as a starting fullback and they are phenomenal.

"He hasn't had a poor game when starting in the one jersey ... the more times Ryan touches the footy the more dangerous he is and our footy side is." 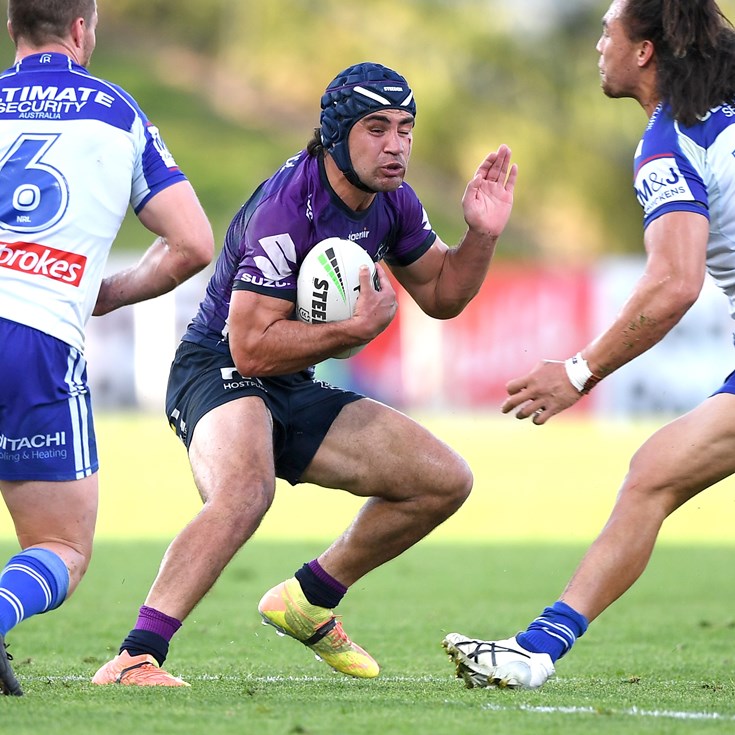