Broncos premiership-winner Peter Ryan was one of the toughest defenders to ever lace up a boot.

From his earliest days listening to Tommy Raudonikis's colourful pep talks to sharing the big stage with Brisbane royalty and later a switch to the rah-rahs, Ryan left nothing in the tank in his pursuit of excellence.

In this latest instalment in a series of Legend Q&As from the Rugby League Week archives, he reflects on how his sister convinced Wayne Bennett he was worth a shot, why he loved the Super League War and why his wife knocked his boxing career on the head.

You were born in Ipswich and grew up just west of there in Laidley, one of the toughest rugby league areas there is. Did that shape you?

I started playing for the Laidley Lions when they didn't have really younger teams, so I played under eights for three years in a row. My father had a butcher's shop in town and I grew up on horses and cattle, and eating a fair bit of meat. Tommy Raudonikis was the head coach of the Laidley A grade side at the time and I always made sure I was close enough to hear some of the colourful language that Tommy used to come out with at half time. I had never heard it before, coming from a strict Catholic family! I remember Sid Faulkner was a prop who played for Laidley and he got suspended for biting a bloke's ear off. There were some colourful characters that made me think rugby league was the place to be. The hardness of the first grade guys in Laidley was something I found appealing.

You made your first-grade debut for the Broncos in 1992. What was that like?

I actually went there in 1989 straight out of boarding school and played for Wests Colts. It was unusual how I got to the Broncos. My sister Geraldine worked on reception at the Travelodge in Brisbane and Wayne Bennett and the Queensland side stayed there during the Origin period. Geraldine, being forthright and up front as she is, fronted Wayne every time she saw him and went out of her way to make sure he knew she had a brother who she thought was a pretty special footballer. She pestered him through the whole Origin period and eventually he made contact with a family friend of ours from Laidley, John Edyvan, who was the president of the Ipswich rugby league. He backed up what my sister had to say and I was on my way to the Broncos.

Were you awestruck to be playing under Bennett at such a young age?

Wayne came to Laidley and met mum and dad and myself at our family home when I was just 17. I always thought he was a very affable bloke you could talk to about anything. I never felt awestruck by him at all. In later years I used to call him 'big ears' or 'long neck'. Once he's your friend, he's your friend forever. He was my boss for many years as a player and when I came back to coach at the Broncos I won a grand final (in 2006) with him as well. I learned 50 per cent of what I know off Wayne, in terms of the structures I set up in defence at the Cowboys and various things I implement... and then I put my own spin on it. Wayne is a hard bastard too. He can be strict. But he can be soft as butter in looking after blokes like they are part of his family, which I felt I was.

You were at the Broncos at a great time. The backs were scintillating, but how do you rate the forwards of those in the initial premiership wins?

I was on the bench for the 1992 grand final, played in 1993 and 1997 and was suspended in 1998. They used to call us the pop-gun pack back in 1992-93. We didn't have much size except for Glenn Lazarus. In the back row we had guys like Alan Cann, Terry Matterson and Trevor Gillmeister, who were not the biggest back-rowers in terms of the 105 kilo guys you see today. We may have been small but we always reckoned we had plenty of grunt in terms of what we did in the game. Our defence had plenty of punch to it.

Everyone bags the Super League and ARL war but I think it was one of the best things that happened to the game. My pay packet more than tripled. I already had a four-year-old. It put you in the right frame of mind so that you were providing for your family. It was a wonderful time in Brisbane. We had 58,000 at ANZ for the grand final… and we had the longest game in history in the Super League Origin series. One thing that irks me is that I only get the two Origin games recorded in the history books for playing the following year in 1998 even though I played two in the Super League time, but I got paid for it and I certainly bled for it.

Why did you leave the Broncos to play rugby union for the ACT Brumbies?

I'd been at the Broncos for 11 years and had another year to run on my contract. There were young guys coming through and I missed a fair bit of 1999 with injury. I remember saying to Wayne that I had been offered a position down at the Brumbies. He said, 'Are you doing it for the right reasons?' I said, 'I don't want you to be saying my time is up. I want to leave on my terms.' I remember when I first went to the club and they sacked Wally Lewis as captain. I said to the guys, 'If they can sack Wally Lewis, then none of our jobs are safe'.

You won a Super 12 title at the Brumbies and played with greats like George Gregan and Stephen Larkham. What was that like?

In my three years we made three Super 12 finals and won one against the Sharks – no mean feat. The biggest thing for me when I went there was to make sure I was super fit. Straight up they put me through what they called one of their hardest fitness sessions and I said to Eddie Jones, 'This is a joke mate. This is soft as butter. We did more than this in the warmup at the Broncos.' He took that on board, and strength and conditioning boss Stu Livingston forced the players into doing a lot more work. The players bought into that, thank God. I was lucky in terms of the players we had. Stephen Larkham could do anything. He could have played league in a heartbeat.

Did they give you a hard time as a leaguie?

Of course they did. But I have a thick skin and it was nothing I couldn't handle. I put just as much on them for being leather patches! They call league players 'Mungoes', because of the big dopey fella (Mongo) in the movie Blazing Saddles. They all think we are a bit dopey, but it is all in jest but they were great people at the Brumbies and I can't say a bad word about them. I was very fortunate to play with such a great club.

Craig Bellamy says you were one of the best defenders he ever saw. Why were you so good?

The main thing I loved about defence was that I could contribute to the team with what I did. My contribution might be to get a turnover from decent contact, slow the play the ball down with good contact or save a try by tackling a guy over the sideline. I didn't want to let anyone down and the first person I didn't want to let down was myself. One of the coaches at Laidley that taught me how to tackle as a kid was Dan O'Brien, who worked on the Telecom. Dan was a bush boxer and a tough old bugger. Dan took his philosophies of boxing into his rugby league and tackling and I attribute a fair bit of my career to him.

Have you done any boxing?

My old man was a golden gloves boxer in Queensland and we did a lot of boxing as kids. I think it is a great grounding to be sat on your backside every now and then. I remember a Queensland versus NSW charity bout where I fought Chris Johns of all people. You could beat Johnsy with a wet paper bag. I had to. I rocked him with a decent one and he was on the wobbly boot so I thought I better go a little bit easy towards the end of the bout. I won, but he still claims a victory because he hit me in the throat and cracked a couple of vertebrae. Air was leaking out into my neck and I looked like a bullfrog. I had to go to hospital the next morning to sort it out and my wife said to me then and there, 'how about we knock the boxing on the head'.

Have you enjoyed your post playing career as a coach?

The enjoyable thing is the team environment. You are part of a group that is a working machine and you are one cog in the machine. If everybody does their job well, there is a reward at the end of the year. When you get those rewards, and I was fortunate enough as a coach and player to have experienced it, there is no feeling like it. That is why I turn up every day. On the wall here in the office I have my Brumbies photo of our Super 12 final win in 2001 and the Broncos 1997 Super League grand final win. I have them here just to remind me what it is all about.

This article first appeared in Rugby League Week in 2011. 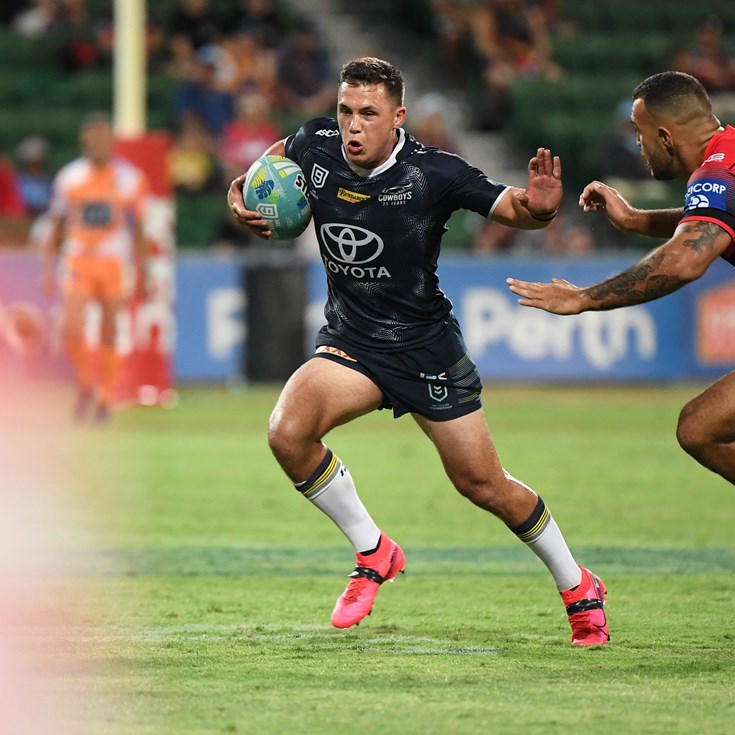 NRL Nines day two: How it all unfolded

The must-see plays from Saturday at the NRL Nines