Brisbane Tigers and Sunshine Coast Falcons both sit in the top four of the Hastings Deering Colts competition and will come up against each other this weekend for Round 8 in what should be an even match of skills.

Sunshine Coast coach Jamie Vogler said he was happy with the execution of his side’s game plan in their last game against Redcliffe Dolphins where they posted a 50-24 win.

“We had a game plan to flood the ruck, we knew they were a big side with a lot of penalties and errors in them... we just tried to play fast footy through them and it worked,” Vogler said.

“We were trying to be better than them in that aspect (discipline) and obviously it worked really well on the weekend, so I was quite happy with our game plan and execution.”

Tigers coach Mark Gliddon said he was extremely pleased with his side’s first half performance against Northern Pride in a game they eventual won 54-28, but called for a full 80-minute performance this weekend.

“We were pretty good the first half, we completed at about 84 per cent and we led 32-12 at half-time which was quite pleasing, but we went away from what was working for us," Gliddon said.

"We stopped completing, went down to about 54 per cent and sort of let them back into the game which was disappointing, but they’re young fellas, they haven’t quite learnt how to play the whole 80 minutes.

“I think every coach in the 21s would be in the same boat, you get 60 [minutes] out of them, but not 80 and the sides that get out there and do that are going to be very strong and hard to beat.”

Sitting in fourth place, Vogler said the Falcons were well primed for the rest of the season and had a lot of confidence going forward.

“We’ve had a couple of lapses, Mackay and Wynnum, that we should’ve and could’ve won, but we’ve learnt from that, and we are quite happy to be in the top four, definitely happy where we are at,” Vogler said.

Gliddon echoed a similar sentiment and said he had been pleased with the development of his side’s chemistry.

“What I like [about this group] is that they have a good work ethic and get along well together, so it’s quite pleasing because we don’t have to do much on the man management side of things, but we are happy where we are sitting at the moment, but we aren’t getting ahead of ourselves,” Gliddon said.

“I think Wynnum are the form team of the competition at the moment.”

Vogler said he was expecting big things from the Tigers this weekend, believing they were a big threat in the competition.

“They’re a dark horse actually, sneaking through Wynnum comfortably, I know they’ve got a couple extra players this weekend, so I know they’re going to be very hard so the boys will have to be really switched on and play a similar game I think,” Vogler said.

“I think every team we seem to be playing are bigger than us and so we have to combat that by playing fast and more skilful.”

Gliddon mentioned the class of the Falcons outfit and believed there were several simple things that would hold the key to victory for this weekend’s clash.

“They look pretty good, they put a fair score on Redcliffe on the weekend and they’re a fair side, but I think they’re pretty clinical, pretty big and play a lot of Melbourne structure, similar to us,” Gliddon said.

“You do your job in the middle and you’re always going to win football games, but I think the side that controls the footy, gets a bit of field position and is patient will win the game.

“As I said, they’re a pretty good team and they are defending premiers.”

Vogler noted some individual performances who have been integral in his side’s high-quality performances to date.

“Matthew Baker, one of our front rowers, scored three in the first 10 minutes last weekend and he’s been outstanding,” Vogler said.

“Kane Jackson, our centre, he’s been a little unlucky with making breaks but he’s a definite threat and I think once he finds his feet, he’ll score a bucket-load come late in the year.”

Whether or not he plays for the Intrust Super Cup side or not this weekend, Gliddon proclaimed the promise and talent of one of his most influential players.

“Probably our hooker, Haele Uha Finau, he’s been pretty good for the team and played Cup the week before and could play this weekend again, but he’s got Cup written all over him."

The Blackhawks are coming off a 70-24 win over Western Mustangs and will be eager to continue this strong form. To do that and make it two wins on the trot, they will have to go through the Capras who can put away anyone on their day, highlighted by a win against the second-placed Souths Logan just two weeks ago.

Burleigh will be keen to make it four wins in a row and further their climb up the ladder, but will have to go through a hot-and-cold Dolphins side who will be looking to bounce back from their 50-24 loss to the Falcons. Sitting in the top eight, the Dolphins will be keen to cement their spot in the middle of the pack and make a push for the backend of the season.

The Pride have had a fairly solid start to the season, registering two wins in seven games, but they are coming off a 54-28 loss to the Tigers. This weekend could be the best chance yet for Ipswich to gain their first win of the season, and they will have to aim up after suffering two heavy losses in the past two weeks.

The Cutters shocked everyone on the weekend, pulling off a 22-22 draw against the competition frontrunners Wynnum Manly last weekend, a turn-around from their loss to the 12th placed Pride the week before. After a slow start to the season, Tweed have now won four games in a row and will be looking to make it five this weekend following up from their 52-20 win over Norths.

The Devils may be down on confidence after a 52-20 loss against Tweed, but will be hoping for a little bit of respite this weekend when they face off against the Mustangs. The Mustangs are still looking to improve this season and gain their first win, suffering another 46-point loss last weekend against the Blackhawks.

The top-of-the-ladder clash between Souths Logan and Wynnum Manly will be hotly contested with the Seagulls coming back down to earth after being held to a draw by the 11th placed Cutters one week after posting a 92-6 win. Souths on the other hand are on the rise again and will be high on confidence after a 59-10 win over Ipswich. 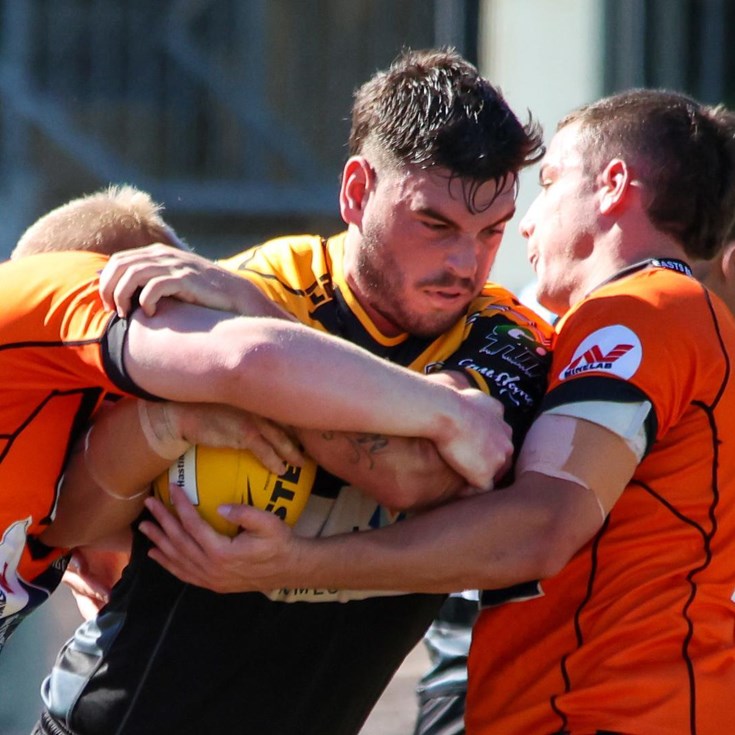