A powerful first half from the Illawarra Cutters saw them set the tone for a dominant performance and break the NSW drought in the Intrust Super Championship.

The Cutters secured a 54-12 win in the match, with man of the match Drew Hutchinson helping to orchestrate the commanding victory.

The Bears started positively in tight opening, with Connor Broadhurst bursting down the right side to threaten the Cutters. However, he had the ball stolen in a one-on-one strip and from there, the Bears did not see any ball in the first half.

The highly-fancied Cutters, brimming with NRL experience, began the scoring when big forward Shannon Wakeman crashed over in the sixth minute.

It was followed by an impressive effort from fellow big man and former Tweed Heads Seagull Damien Sironen who reached out to crash the ball over the line.

His try was followed by four-pointers to fullback Adam Quinlan, Jacob Host and Christopher Lewis to give the NSW side a 30-0 halftime lead.

Things did not get any better for the Bears in the second, with rising St George Illawarra star Drew Hutchinson awarded a controversial try to start the half after the Bears protested possible obstruction. However, the video referee found no issue with the play and the Cutters skipped further in front.

It was one of those days for the Bears where nothing went right despite their best efforts. Balls were kicked out on the full and players pushed into touch when going on the attack.

The Cutters – who were coached by Jason Demetriou, the man who planned the Northern Pride’s raid on NRL grand final day in the interstate challenge in 2014 – could not be stopped and next it was Siliva Havili to crashed over in the 52nd minute, with the Bears defenders unable to hold him up over the line. 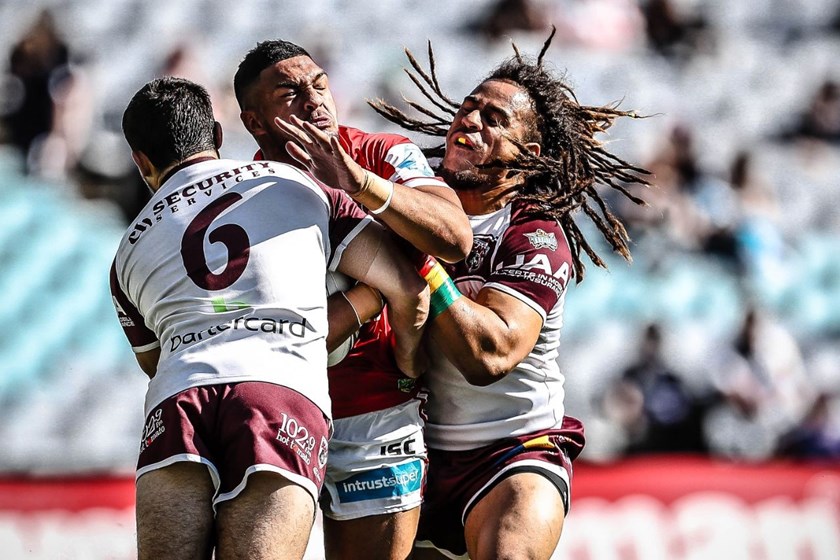 Big prop Josh Ailaomai got the Bears on the board for their first try of the afternoon in the 60th minute by barging his way through next to the left upright, with Jamal Fogarty (who was playing his last game for the Bears before heading to Parramatta) successfully kicking the conversion.

But their errors returned from the kick-off, with Burleigh unable to handle the kick which earned the Cutters at drop out.

The Intrust Super Premiership winners made they pay again, this time with Taane Milne helping the Cutters reach the 50-point mark. Nona’s ninth successful conversion secured a 54-6 lead with 15 minutes to play.

In a beaten side, Kurtis Rowe put in a strong performance from fullback, providing some spark. He was rewarded by scoring the last try of the game following some skill from Cameron Cullen.

In the end, the Cutters were far too strong on the day, putting in an almost flawless performance to suffocate the Bears, while turning on some dazzling attack of their own.

Despite the disappointing result that will hurt the team hard, 2016 was still a season to be proud of for the Bears who not only made the finals for the first time in a number of years, but claimed their first Queensland title since 2004.