Billy Slater enjoyed an eventful end to an eventful career in Maroon, as Queensland dug deep for an 18-12 win to honour the outgoing great.

Retiring from the representative arena after 31 games representing his state – and departing as Queensland's 14th Origin captain - Slater was a split hair away from being the first try-scorer before a buoyant Suncorp Stadium.

Cheered each time he touched the ball, the Innisfail Brothers junior leapt high in the 4th minute above Nathan Cleary to collect a cross-field stab kick from Daly Cherry-Evans.

The on-field referee ruled a try and the video official initially indicated he would do likewise until changing his mind after detecting a minute knock-on in Slater's catch.

This all happened one minute after Slater earnt a penalty when he was welcomed into the match with a shoulder charge from Latrell Mitchell.

Queensland dominated possession for the first half-hour, completing at above 90 per cent and having more than 70 per cent of the ball at one stage.

Reinstated half Daly Cherry-Evans was a key factor in those statistics, with a short kicking game and sustained exertion of pressure which placed the Blues under the pump.

To round out Slater's thrill-a-minute first half, he earnt another penalty when he grubbered and found Boyd Cordner in an offside position from a ricochet.

Then he was involved in an obstruction incident that led to James Maloney being sin-binned in the 30th minute, but which didn't bring a penalty try, much to the displeasure of the 51,214 crowd.

In amongst this all, two intercepts helped shape the game.

Valentine Holmes took a 95m intercept try that put Queensland up 6-0 after his subsequent conversion.

Tom Trbojevic almost replicated the feat when he plucked a Cameron Munster pass to run 90m in the opposite direction.

Queensland sustained a lead of 8-6 until the final minute of the opening stanza, until a miscommunication in defence let James Tedesco score a simple try one off the ruck.

That left the home side in arrears 12-8 at the break, with a notable stat being the 13 hit-ups taken by Gavin Cooper in a non-stop effort.

Valentine Holmes brought things back level on the scoreboard in the 50th minute, finishing a backline movement that featured, you guessed it, Slater and Cherry-Evans in the lead-up.

The try was Holmes' fifth in two Origin appearances at Suncorp Stadium and eighth in five games for Queensland overall.

Slater was at it again six minutes later when he weaved his way upfield on a long break.

Barely 60 seconds later, Cameron Munster carved up the Blues defence from a standing start to offload to Cooper and then Cherry-Evans to score under the posts.

A nerve-wracking final period saw the Maroons empty their energy reserves, with the series already lost 2-0 to the Blues.

At one stage Holmes saved a certain four-pointer by diving forwards full stretch to pluck the ball from the air in a gravity-defying feat of athleticism.

Slater once more featured in a try-saving tackle alongside the tireless Cooper.

The notion of a dead rubber was blown out of the water as the Blues chipped away and the crowd remained on tenterhooks until the final siren.

In his finale, Slater ran for 145m from 17 runs, had four tackle breaks, received the ball 36 times and strung together 19 passes.

Almost in tears as he spoke with Former Origin Great Darren Lockyer at fulltime, Slater described it as a "privilege" to have represented the state over such a lengthy period. 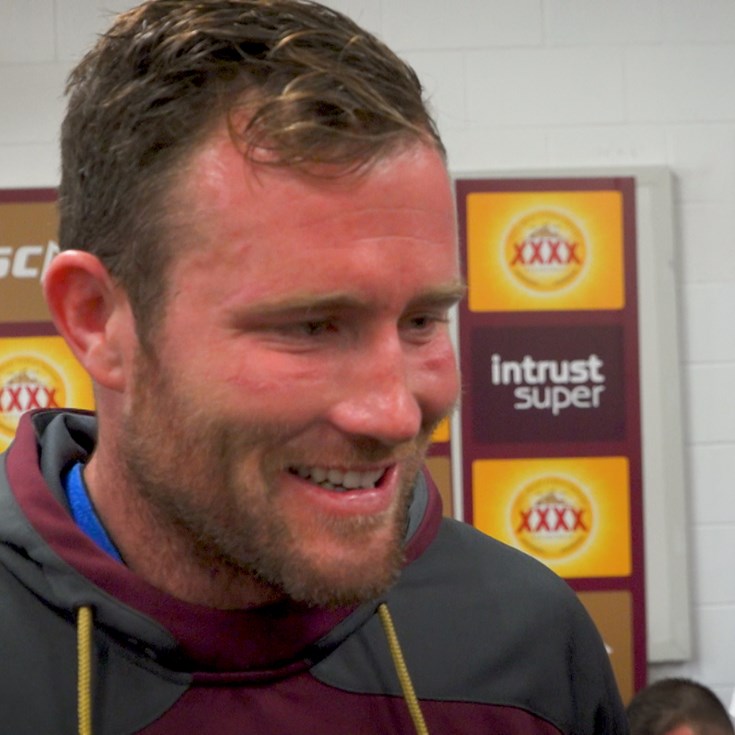 'A lot was made that QLD was dead and buried': Cooper