Cronulla debutant Ronaldo Mulitalo has been told to hold his head high by coach John Morris after he had one minute’s notice that he would debut against the Broncos at Suncorp Stadium.

When Josh Dugan strained a hamstring minutes before kick-off, 19-year-old Mulitalo was called into the side as the players prepared to run out.

It was a bizarre prelude to the match for the Sharks and one Morris described as "unbelievable".

"The last thing [Dugan] did before he left the field to come back into the sheds was feel his hamstring pull so our medical staff were working as hard as they could to come to a decision, but it appears he has a hamstring strain," Morris said after Cronulla’s 29-6 loss.

"We had to make a quick call on him, and then young Ronaldo Mulitalo makes his debut with one minute’s notice. Unbelievable."

It didn’t start well for Mulitalo.

He was thrown a shocking pass by fullback Will Kennedy and was ruled to have knocked on, and Brisbane scored soon after.

Then an Anthony Milford bomb slipped through his grasp and the Broncos were over again.

Morris had comforting words for Mulitalo after the game where he showed tenacity and glimpses of the skills that have him tagged as a talented prospect for the future.

"I said to him after the game that he has got to keep his head up," Morris said.

"It was very challenging circumstances and I thought that apart from a couple of times where he turned the ball over after they kicked to him all night he showed some good touches against a real quality player in Corey Oates.

"It's a good sign for a kid that he can handle all that and still perform strongly."

Morris said Mulitalo’s "head was spinning" as he prepared to make his debut. Morris had no time to give him a pep talk.

"I literally couldn’t really get to him. It was as they were walking out the door. They were still working on Duges and he had one eye on Duges in the corner as he was getting treated,” he said.

"I said to him during the week ‘you’ve got to prepare as though you are playing. You are 18th man for a reason and if the chance opens up you have to be ready to play'.

"He handed his preparation professionally. He is a Queensland kid and if he was going to make his debut anywhere it was good that it was at Suncorp in front of his family so I was really happy for him despite the way it turned out with the result."

The Sharks can’t take a trick on the injury front with five-eighth Shaun Johnson suffering a hamstring injury midway through the first half before leaving the field.

"He hasn’t been one to have hamstring issues in the past so we’ve really got nothing to gauge it off but it is definitely some sort of hamstring strain,” Morris said.

"We’ve got to get him scanned and hold our breath again. Hopefully he doesn’t join the others that are on the sideline for a long period of time."

The Sharks already had big guns Wade Graham, Matt Moylan and Aaron Woods in the casualty ward and can ill-afford Johnson to join them.

One thing Morris has instilled in his squad in his short tenure, and it is a Cronulla trait, is resilience.

"We had a hooker [Jayden Brailey] playing halfback, a kid on debut on the wing and... we could go on all night about the adversity we are under at the moment but we’ve got to just keep turning up, remain professional and I’ll try and find 17 players who are fit next week [against the Storm]. I might have to pull a jersey on again," Morris said. 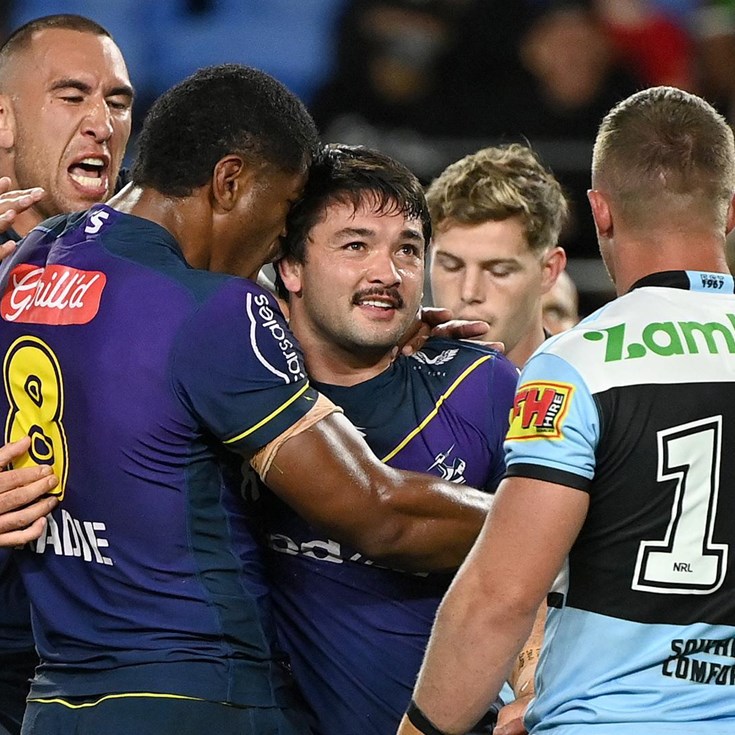