Tanah Boyd has already been influenced by his Queensland Under 20 co-coach Scott Prince and in the years ahead the 18-year-old half is aiming to follow in the illustrious footsteps of the former Gold Coast Titans captain.

Boyd, who joined the Titans from the Brisbane Broncos mid-season, is keen to pick the brain of Prince this week in preparation for a showdown with New South Wales at ANZ Stadium on July 10.

Prince led some sessions with the Broncos halves in the pre-season and Boyd was all ears.

"I learned heaps out of just a few 20 and 30-minute sessions with Princey about going into the line and the tempo of my game - just learning when to play fast, when to play slow and reading defence," Boyd said.

"Princey is big on tempo. He was always one of those players I watched because he was a good runner and good with the ball. That is what I like to be. He was a bit of a star and took the Titans to a couple of finals series. The way he ran that team was awesome.

"Now that he is coaching me I am going to learn a lot off him in camp. He seems like a pretty cool fella and I am really looking forward to it."

If Boyd can keep progressing in the years ahead he will eventually get his chance to wear the No.7 jersey that Prince made his own at the Titans.

Boyd, who grew up on the Gold Coast, was chipping away at the Broncos and playing in the Intrust Super Cup with Souths Logan Magpies when his management company came to him and said they were in talks about a possible switch.

"They came to me and said 'the Titans have come to us and there is an offer there. What do you think?' I had a think about it and where I was at with the Broncs and there was obviously a real good opportunity there," Boyd said.

Then came the clincher – a meeting with rugby league Immortal and Titans head of performance and culture Mal Meninga.

"I had a meeting with Mal and that was awesome. He has just got this aura about him," Boyd said.

"It is Mal Meninga. You are thinking 'I am talking one-on-one with Mal Meninga here'. It is pretty special.

"He was so positive and direct with everything. He just gave me a good feel and I felt comfortable. I just knew then that Mal is taking the club somewhere special in the next few years and I want to be a part of it.

"I made my decision and the Broncos and Seibs [Anthony Seibold] were all awesome about it."

Boyd was on a development contract at the Broncos but is now signed to the Titans in the top 30 squad until the end of 2021.

So excited to be apart of this great club until 2021. So grateful for the opportunity that I have been given, can’t wait to start training with the boys @gctitans #weareready

When the Titans started as a franchise in 2007 and brought top flight rugby league back to the Gold Coast for the first time since 1998, Boyd was in primary school.

He still remembers the moment with a fondness.

"I went to some of the first games at Carrara and the crowds were really good then," Boyd said.

"I grew up on the Gold Coast and was there for 16 years in Coomera, so it was pretty easy to come back. I have settled in really easily because that is home for me.

"My brother and my partner are down there so it has made the transition easy and the boys have welcomed me with open hands.

"[Titans five-eighth] Tyrone Roberts has been awesome and real good with me. You can tell how experienced and calm he is all the time and I am going to learn a lot from him too. When my opportunity comes I am going to take it."

Boyd started the season with the battling Magpies where he learned plenty at the Broncos affiliate club. Now he has moved to the Titans he is lining up with the second-placed Burleigh Bears.

Boyd looks back on his time at the Magpies as beneficial on several fronts and is now relishing his chance to shine with the finals bound Bears.

"Souths was a real big learning curve for me, at a team not going well and not going forward as well as other teams are," Boyd said.

"It is pretty hard for a half and you have got to learn how to change the momentum in games. That has been real good for me and good for my game management side of things.

"I’ve made the move to Burleigh now and they are a team that goes forward and always want to win. They are a pretty professional club. I came off the bench against the Jets last week just to ease in. I don’t know what is in store. I am still finding my feet down there."

Boyd can’t wait to take on NSW in the cauldron of ANZ Stadium on Wednesday with his Queensland teammates. A big performance will go a long way towards securing a win for his state and edge him closer to an NRL debut.

"The exposure you get from these games is massive. You learn so much from the camps and then the experience of playing is completely different," Boyd said.

"It is a lot faster and more physical and you can never switch off in these games. It is the best of the best, so it is always good to be a part of it.”

As this interview came to a close, Boyd revealed he was also a laid back character and not fazed by what was written about him. He had a chuckle about a story recently that tagged him the ‘next Alf’. He knows there is only one Allan Langer. He just wants to be the best Tanah Boyd he can.

"You just let it happen and let them talk about it," Boyd grinned when asked about the story.

"Me and Alfie had a little bit of a giggle and you cop a bit of flak from the boys. Alfie called me 'junior Alfie' and all the boys say the same, but it is all a bit of fun and games." 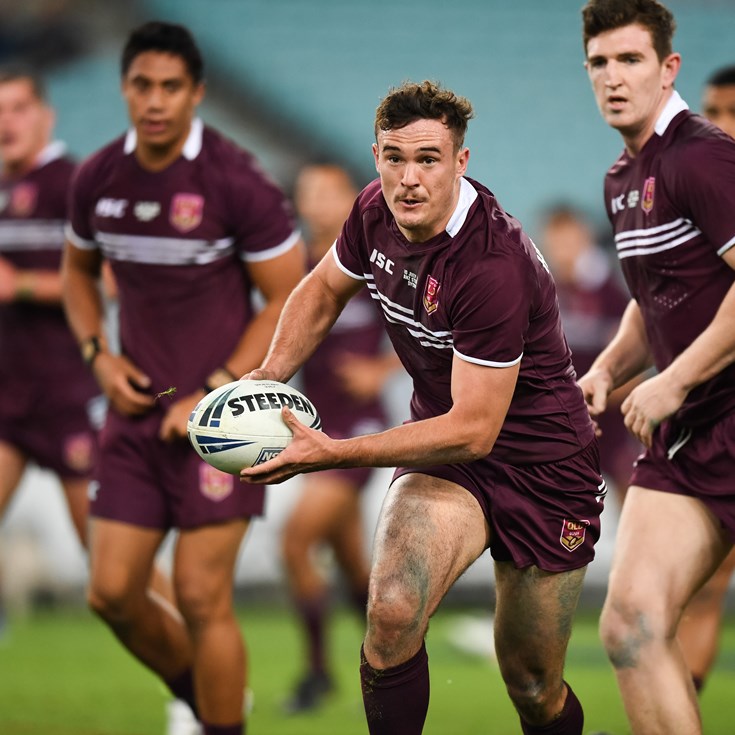 In pictures: Queensland Under 20 miss out against NSW

In pictures: First hit out for Queensland Under 20s