Queensland Under 20 second rower Tino Fa’asuamaleaui has entered team camp an inspired man after making his NRL debut for the Melbourne Storm alongside his idols moments after his father Fereti made an emotional presentation of his jersey.

The 19-year-old Fa’asuamaleaui, who has played the Queensland Under 16 and Under 18 teams, made a huge impression during the Storm’s 16-14 win over the Dragons at WIN Stadium on Thursday night.

Now he’s had a taste of the top flight, he wants more.

You can be certain the giant forward, who has been on fire for Sunshine Coast Falcons in the Intrust Super Cup, will get his wish.

"It was a pretty good experience. I enjoyed it so much, especially playing with my idols like Cameron Smith. It will be a night I will remember for the rest of my life," Tino said after arriving in Queensland camp ahead of the clash with New South Wales at ANZ Stadium.

"After that night I just want more and hopefully I get a couple more games, especially next week I’d like an opportunity just to be in the 21 because it's Smithy’s 400th game. It would be amazing to get a chance there so I have got to play good for Queensland."

The giant forward almost scored with his first touch in the NRL. He rumbled towards the try line, swivelled and was just pulled down before the line.

"I got the ball and I thought 'surely I can’t score on the first run'. I got close and I was thinking about reaching out but then I thought 'nah, I’ve just got to play the ball here'…but almost," he grinned.

Tino was a man inspired after his father Fereti presented him with his jersey before the game, a moment that left him with a lump in his throat.

"Dad played for Roosters reserve grade when Arthur Beetson got him from Samoa and took him to Sydney,” Tino said.

"My dad has been my idol. I look up to him and I have my whole life. To have the jersey presented to me by him on my debut means a lot to me and my family. It was a good feeling. He’s a real good man. My mum [Dianne] and dad have both done so much for me.

"The Storm must have organised it all week. It was a real surprise, so I got a bit emotional when my dad spoke about how proud he was of me. He thanked the Storm so much. He said that no matter whether you’ve played ten or one game, that I am an NRL player now."

Tino, who attended James Nash High School and Gympie Trade Training Centre, is a man mountain. He’s 196cm tall and wanted to clarify just how much he weighs.

I was a bit of a chubby boy growing up but as soon as I hit the age of 15 that is when I got my growth spurt. I have been growing ever since and I still get growing pains now. I guess I am still growing.

With Tino on the field with the likes of Tui Kamikamica, Nelson Asofa-Solomona and Jesse Bromwich, the Storm pack is a virtual land of the giants.

Asofa-Solomona and Bromwich have been mentors and inspirations for the teenager.

"Nelson has been good. We are real close down there and he looks after me. I see how good he is going and representing his country, so I look up to him," Tino said.

"It is good to see a young fella like him achieving his goals from an early age. It makes me motivated.

"Jesse is my idol at the club. He helps me out on the training field with tips and he did on the field [against the Dragons]. When it got a bit tough out here he would say 'get up here…stick with your defence and line speed', just little things to keep me motivated throughout the game.

"The Storm is everything for me. They have always been there for me and my family off the field, and on the field I have learned so much. Every day I am still learning. I love it."

Coach Craig Bellamy has been to Tino exactly what he has been to the likes of Cameron Munster and a cavalcade of Storm players… a second dad.

"He’s been an idol for me too. Especially in my first year he was a bit of a father figure I guess because I didn’t have any family down there," Tino said.

"Having Craig help me the way he does on and off the field means a lot."

When the teenager arrived at the club he felt the wrath of Bellamy. It was a lesson learned and Tino has vowed it will be "the one and only" spray he ever cops from the Storm mentor.

"When I first got to the club I missed my physio appointment. That wasn’t too nice, but never again. I learned my lesson that day," Tino grinned.

"It was quite funny. It was the team meeting room and he walked in and he is like 'where’s Tino?' He is yelling, and I looked to my right because I was sitting next to Smithy and Slater last year. They were laughing with little giggles because they knew what had happened, but I was thinking 'oh no, here we go'. I copped a big spray, but that was the one and only."

The test of any NRL player is backing up after a representative game at club level.

Tino is doing it the other way around, backing up on Wednesday night in Sydney for the Queensland Under 20 team after playing an NRL game. He is not going to leave anything in the tank and has vowed to do one of Queensland’s greatest warriors up front proud.

"This is big. I love Queensland," Tino said.

"I just want to do everyone proud and all the Queenslanders proud. I just want to back up and show everyone that when you put that Queensland jersey on, no matter what you did all week, when it comes to game time it is on.

"When I was younger I looked up to Petero Civoniceva. He was big and tough and would do anything for the team. I always loved that about him." 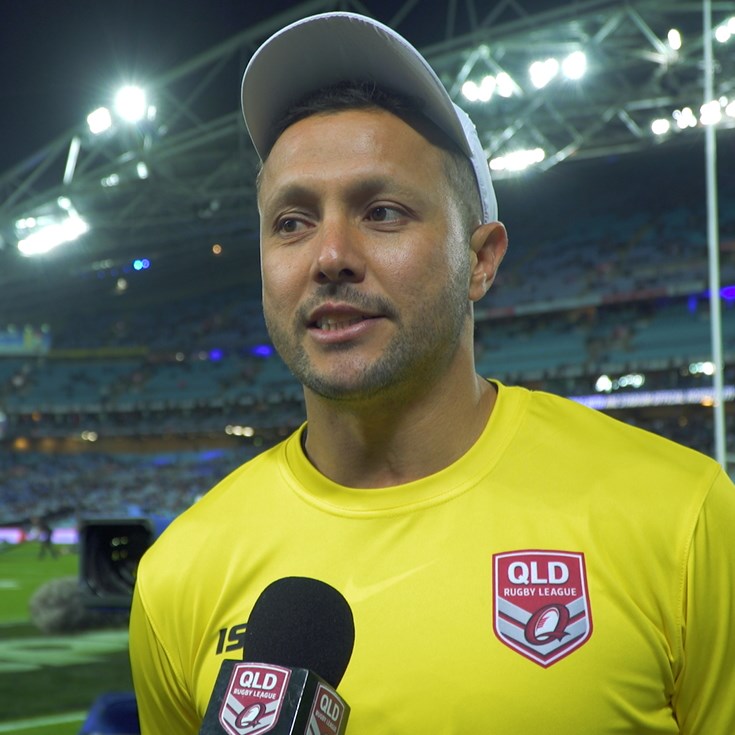 Tom Gilbert: A lot of talk; but honestly; we didn't walk it