Cameron Munster is like water. Hard to hold and if there’s a gap anywhere he will find it.

If there is one player that strikes fear into the NSW Origin team it is the livewire Queensland No.6 who rose from a post-grand final bender to inspire the Maroons to their series triumph last year.

Quite simply, without Munster the Maroons don’t win. It’s why Maroons coach Paul Green will gamble on his five-eighth lasting the full 80 minutes after four weeks out for a Lisfranc foot injury.

His man of the match heroics in the decider last year clinched the Wally Lewis Medal and now the Blues need to find a way to stop the master magician with a right-edge defence that includes Cameron Murray, Nathan Cleary, Tom Trbojevic and winger Brian To’o.

It’s a combination fraught with danger considering Murray rarely defends on the edge at club football, Trbojevic usually plays fullback but is lining up at centre and To’o is on debut.

Who will win the Wally Lewis Medal?

And while Trbojevic is the defender the Maroons plan to exploit due to his relative inexperience defending in the front line, the Manly champion knows the best way to stop Munster.

“He is obviously an exceptional player and we’ve seen that not only in club footy but at this level so he is a definite threat and we’ve looked at him and will be doing our best to stop him,” Trbojevic told NRL.com.

“It’s just about presenting that one square line. You don’t want to have any dents for him to run at, he is a very off-the-cuff footy player so it’s about us presenting one line and making the tackles when you get that opportunity.”

Josh Addo-Carr is Munster’s teammate at the Melbourne Storm and while he is likely to spend the night on the left wing for the Blues, he knows the key to stopping any attacking threat is to take away what they value the most.

Murray will be the glue that holds that right edge together. He knows he will have his work cut out because not only is Munster scheming down that flank, but David Fifita is the opposing second-rower and he has shown all year how quickly he can turn a game with his size and brute strength.

But Murray is confident the Blues have done enough work throughout the week to become a solid defensive unit to handle whatever Munster and Fifita throw at them.

“There is no doubt they’ve got a lot of talent on that side but trying to pick where they’re going to game plan is a pointless strategy so we’re focusing on us and focusing on what we can do,” Murray said.

“We’ve had a really good week of training, working on our defensive and attacking shapes and ticking all the boxes so we go into Wednesday night confident.

“Tommy has had a few games up at centre in his last couple of Origin games. Although he missed last year he has played a fair bit there in the 2018 and 2019 [series] so he has a lot of experience there and he feels comfortable and we feel comfortable as a right edge so it should be good.

“Tommy is a class player and I think he is more than capable of playing in the centres. I don’t think technically he will have any problems and I think he will play really well.”

If anything, Murray believes the Blues right edge can cause headaches for the Maroons.

Perhaps attack is the best form of defence, with Trbojevic and Cleary the two hottest players in the NRL right now based on current form and if they can put some heat on the Maroons in defence it just might take the gas out of their tanks for when they have the ball.

Murray feels something is brewing between his pair of right-side superstars.

“I’m pinching myself I get to play with players like Tommy and Nathan Cleary, they’re probably two of the front-runners of the NRL right now in terms of performance and they’re on my edge,” Murray said.

“I’m really looking forward to hopefully sharing some great memories with them on Wednesday.”

Trbojevic is the name at the top of the Maroons' defensive cheat sheet. They’re wary of what he can produce with the ball and will be especially on edge the moment he leaves his flank to combine with brother Jake in the middle of the field.

Blues coach Brad Fittler has given Trbojevic a licence to roam and, just like Munster, he could be the man that breaks the game wide open.

“It just depends on how the game goes and if you get the ball in good position it gives you more opportunities to play good footy,” Trbojevic said.

“Hopefully we win that field position battle and who knows what can happen then.” 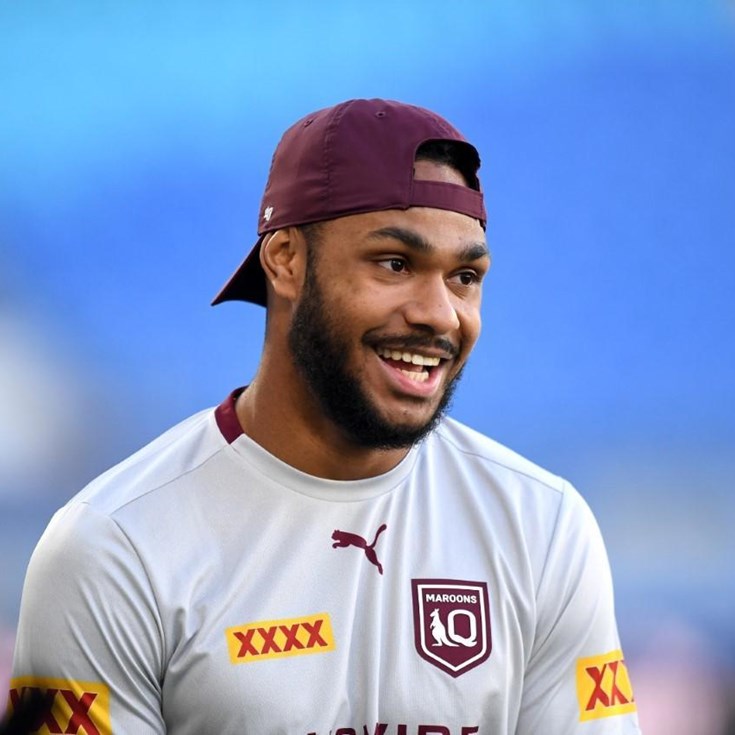